Police in Democratic Republic of Congo (DRC) arrested more than 100 people as they cracked down on protesters demanding that President Joseph Kabila leave power by the end of the year, according to two rights groups.

A series of marches across the country called on Monday by pro-democracy group Lucha, and backed by several leading opposition politicians, were mostly snuffed out by heavy police deployments.

Congolese authorities have banned opposition demonstrations since last September because of security fears.

Kabila’s refusal to step down when his mandate expired last December has fuelled rising violence and insecurity in the DRC but organised opposition has faltered since the death of his main opponent, Etienne Tshisekedi, in February.

Ida Sawyer, Central Africa director at US-based Human Rights Watch, said in a statement that the group had confirmed 57 arrests in the eastern city of Goma, 24 in the capital Kinshasa and dozens more in seven other cities.

At least 22 of those detained had been released by Monday evening, Sawyer said.

Another rights group, the UK-based Amnesty International, said later that more than 100 people had been arrested.

The UN Joint Human Rights Office in the DRC also condemned the arrests on its Twitter account.

“Arbitrary arrests are incompatible with the right to information [and] right of freedom of assembly guaranteed in DRC Constitution,” the office said.

The Association of Online Media in DRC (MILRDC) meanwhile said in a statement that seven journalists had been briefly arrested in Kinshasa while covering the aborted march there.

The DRC’s electoral commission said earlier this month that a vote to replace Kabila will probably not be possible this year.

That would violate a deal struck with the opposition in December that allowed Kabila, whose father Laurent preceded him as president, to stay in office past the end of his second and final constitutional mandate.

Security forces killed dozens of anti-Kabila protesters last year and recent bouts of unrest have raised fears of a resurgence of the civil wars that led to the deaths of millions in the DRC between 1996 and 2003.

Vote to replace Kabila ‘probably not possible’ in 2017 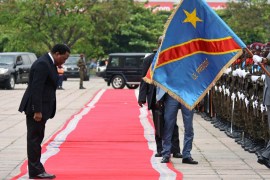 Announcement likely to further divide the president’s opponents in a country that has been rocked by violence.