Egyptian and Palestinian leaders have met amid signs of cooperation between Cairo and the Hamas group that could shake up Gaza’s political landscape and sideline the Palestinian president.

Officials close to Abbas said the Palestinian leader wanted to seek clarifications on what appears to be an emerging power-sharing agreement between Gaza’s Hamas rulers and an exiled Abbas rival, former Gaza strongman Mohammed Dahlan in the meeting.

Under the deal, parts of which have been confirmed by other parties involved, Hamas would retain control over Gaza’s security, while Dahlan would eventually return to Gaza and handle its foreign relations.

The officials spoke on condition of anonymity to the Associated Press news agency because they were not authorised to speak to the media.

Neither leader made any comments to the media after their meeting in Cairo. A statement by Egypt’s presidential spokesman stuck to generalities.

The two leaders, the statement added, discussed the latest developments in the Palestinians’ bid for statehood and ways to revive the peace process.

Dahlan was a key Fatah figure behind the Fatah-Hamas street clashes that erupted after Hamas’ victory in parliamentary elections in 2006, which eventually led to the violent takeover of Gaza by the group a year later.

Dahlan and Hamas have been bitter enemies, but their interests began to align in recent months. Dahlan’s desire to return from exile and one day succeed Abbas has coincided with Hamas’ growing desperation as Abbas has been applying greater financial pressure on Gaza.

The emerging understandings between Egypt, Hamas and Dahlan could pose a serious political threat to Abbas and the prospects of Palestinian statehood in the West Bank, Gaza Strip and east Jerusalem, the lands Israel occupied in the 1967 Mideast war.

If implemented, such understandings would likely help ease Gaza’s decade of isolation, but would also deepen the Israeli-enforced disconnect between Gaza and the West Bank. The two territories lie on opposite sides of Israel.

Egypt has long accused Hamas of providing sanctuary as well as supporting Islamic militants fighting its security forces in the turbulent north of the Sinai Peninsula, a region that borders Gaza and Israel.

Also, Egypt has for a decade joined Israel in a blockade of Gaza, the densely populated coastal strip on the Mediterranean that Hamas has ruled for a decade.

However, relations between Egypt and Hamas appear to have recently thawed.

Hamas officials said the two sides have negotiated security arrangements for the Gaza-Egypt border to ensure that fighters operating in Sinai don’t use Gaza as a refuge. In line with the agreement, Hamas has begun creating a security buffer zone along Gaza’s border with Egypt.

In return, Egypt has provided Gaza’s rulers with fuel for its power station, easing the rolling blackouts that have for long fed discontent among Gaza’s two million residents.

The Egyptian fuel shipments appear to have undermined the stepped up financial pressure on Hamas by Abbas.

The Palestinian president had hoped such measures, including subsidy cuts and a reduction in payments for Gaza electricity, would force Hamas to cede ground in Gaza and gradually turn the population against the ruling group.

Speaking a day after the Islamic State of Iraq and the Levant (ISIL, also known as ISIS) group killed at least 23 Egyptian soldiers in the deadliest attack in Sinai in two years, he said Hamas was “carrying out intensive measures on the border with Egypt to prevent any infiltration” into Gaza after the attack. 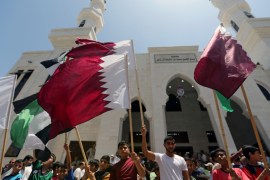 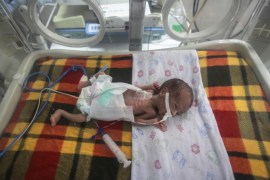 Three infants in need of specialised medical care died this week in Gaza City after failure to obtain exit permits.