More than 50 people were killed in a Boko Haram ambush on an oil exploration team in northeast Nigeria earlier this week, multiple sources told AFP news agency on Thursday, warning the death toll could rise.

Tuesday’s attack in the Magumeri area of Borno state on a convoy of specialists from the Nigerian National Petroleum Corporation (NNPC) was the group’s deadliest in months.

It underscored the persistent threat posed by Boko Haram fighters, despite government claims they are a spent force, and also the risks associated with the hunt for crude in the volatile Lake Chad basin.

Details of the ambush, which was initially thought to be a kidnapping attempt, have been slow to emerge and an exact death toll difficult to establish, as the military strictly controls access to rural Borno.

Telecommunications and other infrastructure have been severely damaged or destroyed in the conflict, which has left at least 20,000 dead and more than 2.6 million homeless since 2009.

The army said on Wednesday that 10 people were killed in the attack.

But one source involved in dealing with the aftermath told AFP news agency on Thursday: “The death toll keeps mounting. Now we have more than 50… and more bodies are coming in.”

“It’s clear that the attack wasn’t for abduction. They (Boko Haram) attacked just to kill.”

An aid agency worker in Magumeri, which is 50 kilometres northwest of Maiduguri, said 47 bodies were recovered from the bush as of Wednesday evening.

“Eleven of them were badly burned in the attack. They were burned alive in their vehicle, which was stuck in a trench,” he added.

“We buried them here because they couldn’t be taken to Maiduguri.

“This evening (Thursday), six more bodies were recovered, including one soldier, and many more could be recovered because search and rescue teams are all over the place.”

A medical source at the Nigerian Army 7th Division headquarters at Maimalari barracks in Maiduguri said: “So far we have 18 dead soldiers. Ten were brought yesterday and eight more today.”

At the University of Maiduguri Teaching Hospital (UMTH), a medical worker said: “We have 19 bodies at the moment of civilians.

“Fifteen of them were vigilantes (civilian militia), and four were staff from the university. They have been taken for burial.”

The head of the academic staff union at the University of Maiduguri, Dani Mamman, confirmed they had received four bodies and said two of them were academics.

“We got the impression our staff on the team were rescued because that was what the military spokesman said yesterday,” he added.

“But we were shocked when we were given four dead bodies. This means it wasn’t a rescue. We still have other staff that are yet to be accounted for.”

Hospital and army officials told the local Punch newspaper that the corpses of 18 soldiers and 30 others had been brought to a facility in Maiduguri following the incident.

In a statement, Nigeria’s junior oil minister and the former head of the NNPC Emmanuel Ibe Kachikwu described the attack as “unfortunate” but did not give a death toll.

OPEC-member Nigeria is looking to find new oil reserves away from the southern Niger Delta, which has been blighted by attacks from rebels wanting a fairer share of revenue for local people.

With production hit by the attacks, there has been a shift in focus to explore inland basins, including around Lake Chad in the northeast, where Nigeria meets Cameroon, Chad and Niger.

Both Chad and Niger are exploiting reserves on their side of the freshwater lake.

Activities on the Nigerian side had to stop in November 2014 because of Boko Haram violence, but the military gave permission to resume exploration in November last year, according to Kachikwu.

Work is centred on a triangle of hotly contested land stretching from Gubio in the west of Borno to Marte in the east, and Kukawa, in the far northeast corner near the shores of the lake.

There has been no serious suggestion that Boko Haram is motivated by a desire to control oil in northeast Nigeria.

But fighters, squeezed out of captured territory by the military counterinsurgency, may have been eager to make a show of force against the soldiers and civilian militia guarding the NNPC team.

In recent months, the Islamic State of Iraq and the Levant (ISIL, also known as ISIS) group affiliate has been forced to rely on guerilla tactics, particularly suicide bomb attacks, against the security forces and civilian militia.

Women and young girls, in particular, have been used against civilian “soft” targets such as mosques, as well as the university in Maiduguri. 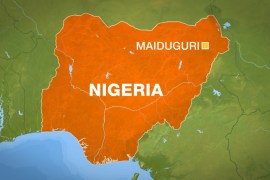 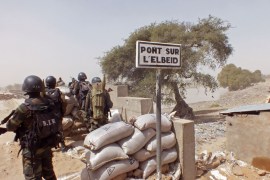