Scores of people have been killed in landslides and flooding after heavy monsoon rains battered southeast Bangladesh, police and medical officers said.

The death toll climbed to 134 on Tuesday, according to local officials.

Many of the victims were from tribal communities in the remote hill district of Rangamati, close to the Indian border, where 98 people were killed when mudslides buried their homes.

“The recovery work is still going on. The death toll could rise as many areas still remained cut off,” the head of the Department of Disaster Management Reaz Ahmed told AFP news agency.

Ahmed said disaster response teams had been deployed to the affected areas to reinforce recovery work.

Seven people, including three children, were killed in the hilly town of Bandarban, after their homes were buried in mud on Monday night, according to police officer Rafiq Ullah.

“Some of them were sleeping in their homes on hillsides when the landslides occurred,” district police chief Sayed Tariqul Hasan said.

Another 30 of the casualties were in the neighbouring district of Chittagong.

“This particular mudslide tragedy is one of the worst in recent years for Bangladesh,” Al Jazeera’s Tanvir Chowdhury, reporting from the capital, Dhaka, said.

“Experts think the government could do much more to prevent the loss of life by evacuating people living in the hilly areas during the monsoon season,” said Chowdhury.

Heavy rains also pounded the capital and the port city of Chittagong in the district of the same name, which experienced 222mm of rain, disrupting traffic for hours.

Among the victims were four soldiers who had been sent to clear roads in Rangamati district after an earlier landslide.

Thousands of troops are stationed in Rangamati, where a tribal insurgency raged for two decades, and which still suffers sporadic violence.

“The soldiers were sent to clear roads hit by landslide in Manikchhari town when they themselves buried by a second landslide,” armed forces spokesman Lieutenant Colonel Rashidul Hassan said.

Bangladesh experienced heavy monsoon rains throughout Monday because of the influence of a depression formed in the Bay of Bengal.

The Dhaka Met office said Tuesday morning it had recorded 343mm of rainfall in Rangamati over the course of 24 hours. 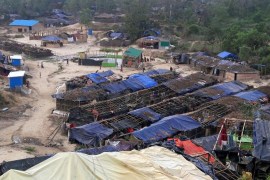 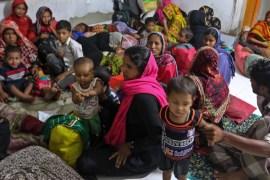