After two decades in hiding, Hezb-i-Islami leader Gulbuddin Hekmatyar returned to Kabul on Thursday, pleading for peace as he was welcomed by the Afghan government at the presidential palace.

The controversial commander’s arrival in the capital – a city his forces had shelled with thousands of rockets during the Afghan civil war – came after his largely dormant group signed a peace deal with President Ashraf Ghani’s government in September.

A former prime minister, Hekmatyar was a prominent anti-Soviet commander in the 1980s and stands accused of killing thousands of people from 1992 to 1996.

A convoy of dozens of white pickup trucks carrying armed men and draped in Afghan flags and green banners made its way through the capital as it brought Hekmatyar from Jalalabad, the eastern city where he has been based for the past few days.

Calling his former allies in the Afghan Taliban “brothers”, Hekmatyar, whose address at the presidential palace was frequently interrupted by shouts of acclamation, portrayed himself as a mediator able to bring peace.

That, he said, would remove the justification for the presence of foreign troops in Afghanistan.

“The most important issue for me is to end this war and rescue the country from crisis,” said Hekmatyar, calling on neighbouring countries like Pakistan and Iran not to interfere.

The Hizb-i-Islami leader said he had accepted the constitution drawn up following the US-led campaign that ousted the Taliban in 2001, but wanted it amended and said a parliamentary system was not appropriate for Afghanistan.

The national government led by Ghani and Chief Executive Abdullah Abdullah, painstakingly brokered by Washington after the disputed election of 2014, was “not working”, he said, and either Ghani or Abdullah should resign, but claimed that he was not seeking any formal position for himself.

“I am not here for partnership. I have no conditions, I don’t want ministries,” he said.

The Taliban has shown no sign of accepting any arrangement with Hekmatyar, but Ghani thanked him for accepting the deal and said the Afghan people wanted peace and prosperity.

“We have promised the nation that we will pave the way for the peace and today an important step has been taken,” said Ghani.

Hekmatyar’s call for peace echoed a speech he gave last week in Afghanistan’s eastern Laghman province – his first public appearance in 20 years – where he urged the Taliban to come to the negotiating table.

“If you lay down your guns and come forward, I will be the first one to call you my brother. To the Taliban, [I say] come forward, let’s talk about peace and prosperity, and join us in this peace process in Afghanistan,” he said on Saturday.

But in Kabul – where posters of his face had been plastered all over the city, with many immediately defaced by opponents – Hekmatyar was awaited with mixed feelings.

Hekmatyar was the “chief destroyer” of Kabul, metal worker Edress Arabzada told the AFP news agency, calling the commander to apologise for the killings of innocent people.

But, he added, “we welcome his arrival to Afghanistan if it leads to peace and stability”.

“All the warlords are corrupt and have blood on their hands,” he told AFP. “But, we welcome (Hekmatyar) to Kabul because we are tired of war and conflict.”

During his self-imposed exile, Hekmatyarwas long believed to be living in hiding in Pakistan, though his group had claimed he was inside Afghanistan.

Following the 2001 US-led invasion of Afghanistan and fall of the Taliban, the US State Department designated him a “terrorist”, accusing him of taking part in and supporting attacks by al-Qaeda and the Taliban.

But his Hezb-i-Islami armed group has been largely inactive in recent years, with its last big attack in Afghanistan, which killed 15 people – including five Americans – in 2013.

In February, the UN Security Council lifted sanctions on him, which paved the way for his return to Afghanistan.

Human rights groups were strongly critical of September’s agreement, saying it reinforces a culture of impunity that allows those accused of human rights violations to get away with abuses. 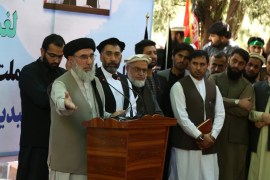 At first public gathering in 20 years, controversial Afghan leader calls on fighters to come to the negotiating table. 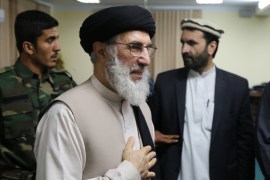 Controversial commander returns from self-imposed exile after his group signed a peace deal with the government. 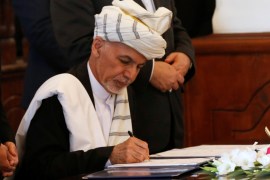