A priest and several churchgoers have been taken hostage by fighters in Marawi City, on the Philippine island of Mindanao, as thousands of residents fled ongoing unrest that prompted President Rodrigo Duterte to declare martial law in the southern region.

As the violence continues, Duterte said on Wednesday that he will consider expanding his martial law order throughout the country “in order to protect the people”.

The violence erupted on Tuesday after the army raided the hideout of Isnilon Hapilon, a commander of the Abu Sayyaf group, which has pledged allegiance to ISIL. Abu Sayyaf fighters called for reinforcements from an allied group, the Maute, and dozens of gunmen managed to enter Marawi, home to about 200,000 people.

Clashes between security forces and about 100 fighters ensued, leaving at least three members of the security forces dead. The attackers reportedly burned a Catholic church, the city jail, and two schools, as well as occupied the main streets and two bridges leading to the city, located some 816km south of the capital, Manila.

Archbishop Socrates Villegas, president of the Catholic Bishops Conference of the Philippines, said fighters had forced their way into the Marawi Cathedral and seized a priest, 10 worshippers and three church workers.

“They have threatened to kill the hostages if the government forces unleashed against them are not recalled,” Villegas said in a statement.

“[The priest] was not a combatant. He was not bearing arms. He was a threat to none. His capture and that of his companions violates every norm of civilised conflict,” he added.

The husband of a woman being held hostage said he was worried about his wife, a secretary at the cathedral, because she does not have her medicines for a heart problem.

“I hope they free them, including Father Chito and my wife and their companions, because they are innocent,” Jaime Mayormita told Manila’s DZMM radio.

The man said when he last called his wife, someone else answered her phone, telling him to ask the military not to go near the area.

Mayormita added he had not been able to contact his wife since then.

Officials were not available for comment on the report of hostage-taking.

The emergency declaration of the military rule took immediate effect and will last for 60 days, according to presidential spokesman Ernesto Abella, who made the announcement on Tuesday from Russia, where Duterte was on a scheduled four-day official visit.

“This is possible on the grounds of the existence of rebellion,” Abella said.

After cutting his trip to Russia short, Duterte said he may also declare martial law elsewhere in the Philippines if attacks continue.

He assured the public he will not allow abuses under military rule, even as he repeatedly said he will deal with “terrorism” harshly.

“To those who have experienced martial law, it would not be any different from what president [Ferdinand] Marcos did,” Duterte said. “I’ll be harsh.”

Steven Rood, of the Asia Foundation, said that there are several restrictions under the country’s current post-dictatorship constitution.

“There is a time limit of 60 days, the courts continue to operate, the legislature is still there – so there has been an attempt to soften the effects of martial law,” he told Al Jazeera.

“On the other hand, the persisting violence in Mindanao hasn’t been soft, and so particularly strong-willed people such as the president often think of something forceful like martial law.”

Rood said, however, that martial law alone will not ease the situation.

“Shooting to kill won’t be a solution; there needs to be a much broader attempt to address the issues that are being raised by average people in Mindanao that sometimes can feed this disconentent.”

Al Jazeera’s Jamela Alindogan, reporting from Mindanao, said that for many locals, the situation was reminiscent of the martial law imposed four decades ago.

“For many who have lived through the dark years of martial law in the 1970s, this is like a living reminder of what they went through,” Alindogan said.

“For the young ones, who have only heard about this, this whole rebellion in Mindanao started during the martial period, and this rebellion has held back the region for decades.”

She also said there was an exodus of thousands of residents from Marawi.

“People have been walking for hours to try to escape the violence and get out of a city that was once the most peaceful in southern Philippines,” Alindogan said.

Abu Sayyaf and Maute have been blamed for bombings, attacks against government forces and kidnappings in the Philippines. They have also  beheaded hostages .

Photos posted on social media by Marawi residents showed armed men roaming the city with the black flags of ISIL.

“Please pray for us here,” said Mohammad Abedin, president of the Lanao Del Sur Medical Society in Marawi. “We can see houses burning and we don’t have electricity now.” 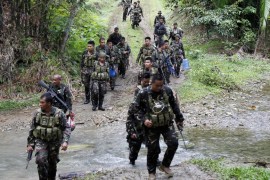 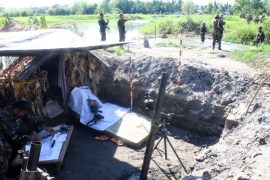