The US administration has accused the Syrian government of installing a crematorium in a military prison in order to destroy the remains of thousands of murdered prisoners.

“Beginning in 2013, the Syrian regime modified a building within the Saydnaya complex to support what we believe is a crematorium,” he said, referring to a military jail north of Damascus.

“Although the regime’s many atrocities are well documented, we believe that the building of a crematorium is an effort to cover up the extent of the mass murders taking place in Saydnaya.”

Jones said the information came from credible humanitarian agencies and from the US “intelligence community” and that as many as 50 people per day are thought to be hanged at Saydnaya.

He did not give an official estimate for the total number killed, but cited an Amnesty International report that between 5,000 and 11,000 people had died during the 2011-2015 period in the prison.

President Bashar al-Assad’s Syrian government, he alleged, had detained between 65,000 and 117,000 people over the same period.

White House Press Secretary Sean Spicer said later in the day that the “Assad regime has sunk to a new level of depravity”.

Spicer said the government in Damascus had done so “with seemingly unconditional support from Russia and Iran”.

In his press briefing, Jones said Russia had “aided or passively looked away” while the government carried out atrocities.

The latest satellite photograph presented by the state department dated to January 2015, more than two years ago.

It was not immediately clear why the US waited to present its evidence.

Syria’s war, now in its seventh year, has killed nearly half-a-million people and displaced more than half of the country’s pre-war population.

One newly-released image, a commercial satellite photograph dating back to January 2015, shows snow melting on the roof of a building attached to the Saydnaya military complex.

This, along with an earlier picture allegedly showing heavy-duty ventilation systems on the structure, appear to support earlier claims by rights groups that Saydnaya is an execution centre.

Jones said the state department’s information came from credible humanitarian agencies and from the US “intelligence community”. 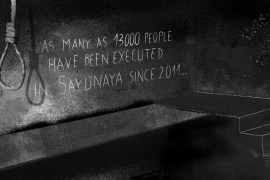 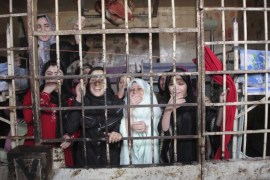 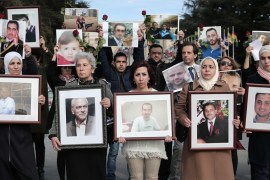