Al Jazeera looks back at some of the key developments since the uprising against Gaddafi began.

The first major protests and violent clashes in Libya actually began two days before, on February 15, mostly in Benghazi. Hundreds gathered outside the police station, and a number of protesters were killed.

But February 17 was the official “day of revolt,” an effort to bring thousands of protesters into the streets . Major demonstrations were reported in Benghazi, Ajdabiya, Darnah and Zintan, among others. Gaddafi forces responded by firing live ammunition at the crowds. More than a dozen demonstrators were killed.

Gaddafi reportedly released dozens of prisoners from jail and paid them to fight against the protesters.

The “day of revolt” coincided with the fifth anniversary of a major anti-Gaddafi protest in Benghazi.

Protests continued to escalate after February 17, and there were widespread reports that Gaddafi had hired mercenaries to supplement his security forces and suppress the demonstrations.

Cities further east, including Baida and Tobruk, were already under rebel control at this point. Doctors at Benghazi’s ill-equipped hospitals said more than 300 people were killed in several days of fighting , which included numerous attacks on funeral processions.

The key event in the battle for Benghazi was the fall of the Katiba , the city’s well-stocked military garrison staffed by, among other units, the feared Khamis Brigade. Fighters armed with rifles and homemade bombs laid siege to the garrison for several days, and a reported suicide car bomber eventually blew a hole in the building’s gate, allowing the fighters inside.

Gaddafi would continue to launch sporadic attacks on Benghazi in the weeks to come, but would never regain control of the city.

Further west, though, the early weeks of the war did not go well for the rebels.

Residents in the “rebel capital” grew increasingly fearful of bombing raids from Gaddafi’s air force.After an initial advance, Gaddafi began pushing the rebels back. His military shelled Ras Lanuf, a key oil port in eastern Libya, and seized the nearby town of Brega; there was also fierce fighting in Ajdabiya, another stop on the road to Benghazi.

A small revolt in Zawiyah, 50km to the east of Tripoli, was quickly crushed by Gaddafi’s forces; that early defeat made many Libyans in the east reluctant to oppose the government.

Gaddafi delivered several memorable speeches on Libyan state TV in late February and early March. He often blamed the protests on foreign intervention , and threatened to hunt down the protesters – “alley to alley, house to house.”

The rebel losses in the east were a major reason for the push for a no-fly zone over Libya.

After a debate, the United Nations Security Council voted to impose a no-fly zone over Libya. Ten of the council’s 15 members voted “yes,” while five – Russia, China, India, Germany and Brazil – abstained.

The resolution called for international military action to protect civilians. It would be enforced primarily by NATO, with logistical support from several Arab countries, including Qatar and the United Arab Emirates.

French jets began bombing Libya just hours after the resolution was passed , with bombers from the United States, the United Kingdom and other countries joining shortly afterward.

Rebel commanders would frequently complain about the pace of NATO air strikes (they wanted more), and several of them missed their intended targets and killed rebel fighters instead. But the bombing campaign was undeniably a major reason why Gaddafi’s military advance halted in mid-March.

May 15, Gaddafi forces withdraw from Misrata

The seaside city of Misrata was besieged for months by Gaddafi forces; they surrounded it and frequently lobbed mortars downtown.

Hundreds of civilians and rebel fighters were killed, and thousands more wounded, during weeks of fighting in the city centre and near the port. Civilians reported appalling living conditions: scarce food and water, little to no electricity, and a severe shortage of medical supplies.

NATO planes began bombing the city in late April, targeting Gaddafi’s tanks and artillery. Rebels began their own counter-offensive on April 25, pushing slowly from the east, seizing the port area and working their way through the city.

A fierce battle on May 11 left the rebels with control of the airport, and four days later they declared the battle for Misrata over.

Rebel gains in the east slowed down after the Misrata campaign, but they began winning territory in western Libya, allowing them to surround Gaddafi in Tripoli.

The rebels began their push in early June, and for several weeks they reported steady gains, capturing scattered villages and seizing much-needed supplies from the Gaddafi troops stationed in the region.

Their advance was halted in early July at the town of Qawalish. It took several advances to seize the town; rebels had to retreat at one point because they ran out of ammunition.

By late July, the rebels were pushing down from the Nafusa Mountains to towns in the foothills , allowing them to control strategically important roads linking Tripoli to Tunisia – Gaddafi’s main source of supplies.

Rebels would seize several other important towns, including Tiji and Bir al-Ghanam, after the start of Ramadan in August.

The war’s final phase seemed to begin last week, when rebels reported taking control of Gharyan, a town about 80km south of Tripoli.

That victory allowed them to completely encircle the Gaddafi-controlled capital: All of the major highways leading out of Tripoli now pass through rebel-controlled areas.

Control of Gharyan, and the town of Zawiyah in the west, is not yet absolute; there are still reports of scattered shelling by Gaddafi’s artillery. But the Libyan leader has been unable to retake these towns, and with reports of fighting on the streets of Tripoli, his grip on power is weaker than ever.

Libya’s rebels say they have completed moves to cut off roads to the capital.

Reports confirm the oil plant near Az Zawiyah was taken and rebels were in complete control of Gharyan. Battles continued over control of centre of Az Zawiyah city.

Opposition source report more than 30 dead and 120 wounded in operations to further cut-off the capital from its supply lines. According to a Libyan government official, Hassan Ibrahim, the brother of Libyan government spokesman Moussa Ibrahim, was killed by gunfire from a NATO helicopter.

Opposition cells in Tripoli supported by NATO launched an uprising codenamed “Operation Mermaid Dawn”. Many of the weapons used by rebels had been assembled and sent to Tripoli by tugboat.Rebels suffered high casualties.

Gaddafi makes two addresses over state TV, calling on Libyans to fight off the rebel “rats”, and saying he is in the capital and will be “with you until the end”. Rebels reach Green Square and rename it Martyrs’ Square.

It was believed that Tripoli had largely fallen and there were reports that three of Gaddafi’s sons were captured alive. Later in the day, however, Saif al-Islam Gaddafi showed up outside the Rixos Hotel, posed for pictures and a video and said his father’s forces were still in control of the city. His re-emergence put earlier reports about his capture, and the rebels’ hold on the city, in serious discredit.[

August 23, Battle for Tripoli rages on

Libyan rebels launch massive offensive on Gaddafi’s compound. Rebel fighters mount an attack backed by captured tanks on the compound, in the centre of the capital. The sky was filled with the sound of heavy and light machineguns as well as mortars, with the overhead roar of NATO jets that have been carrying out much more intense air raids than in recent days.

WATCH: ‘An era has come to an end’

The meeting takes place at a conference in Paris to discuss reshaping Libya. Gaddafi, on the 42nd anniversary of his coming to power, urges his supporters to fight on.

Mahmoud Jibril, the interim prime minister arrives in Tripoli on his first visit since it was taken by his forces.

Niger reprots that Gaddafi’s son Saadi has arrived in the country.

Mustafa Abdel Jalil, Interim government chief, makes his first speech in Tripoli to a crowd of about 10,000.

September 15, Cameron and Sarkozy in Libya

Nicolas Sarkozy, the French president and David Cameron, the British prime minister, land in Libya to a heroes’ welcome.

September 20, US ambassador returns to Libya

Barack Obama, the US President, calls for the last of Gaddafi’s loyalist forces to surrender as he announces the return of the US ambassador to Tripoli. Gaddafi taunts NATO in a speech broadcast by Syrian-based Arrai television station.

The interim rulers say they have captured most of Sabha, one of three main towns where Gaddafi loyalists have been holding out since the fall of Tripoli. Gaddafi’s birthplace Sirte and the town of Bani Walid continue to resist.

The first Libyan crude oil to be shipped in months sails from the eastern port of Marsa el Hariga for Italy.

NTC forces say they have control of the whole of Sirte except neighbourhood ‘Number Two’ where Gaddafi forces are surrounded.

Gunfights break out in Tripoli between Gaddafi supporters and NTC forces, the first sign of armed resistance to the new government.

NTC forces celebrate the capture of Bani Walid, one of the final bastions of Gaddafi loyalists.

Hilary Clinton, the US secretary of state, arrives in Libya on an unannounced visit, urges militias to unite.

Abdul Hakim Belhaj, the NTC military chief, confirms that Muammar Gaddafi has died of his wounds after being captured near Sirte.

Mustafa Abdel Jalil, the leader of the NTC, has declared the liberation of Libya eight months after the uprising against Muammar Gaddafi’s 42-year rule began. Jalil kneeled in prayer after taking the stand in a celebration in Benghazi and promised to uphold Islamic law.

“We as a Muslim nation have taken Islamic sharia as the source of legislation, therefore any law that contradicts the principles of Islam is legally nullified,” Jalil told the crowd.

The bodies of Muammar Gaddafi, his son Mutassim, and a former aide were moved from a commercial freezer in a warehouse area of Misrata where they had been put on display, in anticipation of burial planned for Tuesday.

The NTC also ordered an investigation into the death of Gaddafi after international pressure to examine the circumstances surrounding his death.

“In response to international calls, we have started to put in place a commission tasked with investigating the circumstances of Muammar Gaddafi’s death in the clash with his circle as he was being captured,” Jalil, the head of the NTC, said in Bengazi.

Saif al Islam Gaddafi has been arrested near Ubari in southern Libya. In a press conference, Bashir al-Taylib, a military commander, told reporters that Saif al Islam had been captured and will be moved to Zintan. 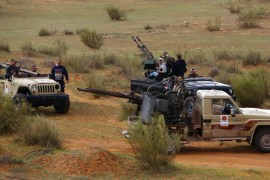 Envoy tells factions meeting in Morocco they have the power to “bring an end to the suffering of the Libyan people”.