Air strikes have killed at least eight first responders from the Syria Civil Defence in Hama province, according to the group also known as The White Helmets.

Saturday’s air strikes hit the rescuers’ centre in Kafr Zita, located in northwestern Syria. Civilians who rushed to the scene to help were also struck, according to the Syria Civil Defence’s Twitter posts.

The air strike was one of the deadliest against the rescuers who operate in opposition-held areas and who have grabbed world attention for operating in extreme conditions, pulling survivors out of recently struck areas.

The volunteers have often been targeted by government air strikes, in what are known as “double tap” attacks, as they work to rescue others.

The Syrian Civil Defence operates in much of Syria’s rebel-controlled territory.

Civilians who raced to rescue buried @SyriaCivilDef also targeted and killed. They too are #everydayheroes. 3/3

The Syrian Observatory for Human Rights (SOHR), a Britain-based monitoring group, said the number of those killed is likely to rise as the search mission continues.

It was not clear who carried out the air strikes, but Syrian government and Russian aircraft have targeted opposition-held areas.

Hama has been the scene of intense violence in recent weeks as the government attempts to push back a rebel offensive.

In an interview with Venezuela-based TeleSUR news network, President Bashar al-Assad blamed opposition groups for “destroying” the country’s infrastructure and reiterated past claims that there were no “moderate” fighters among the opposition.

In Saturday’s other developments in Syria, the military said its troops and allied fighters repelled an attack by the Islamic State of Iraq and the Levant (ISIL, also known as ISIS) group on a strategic area held by the government in the southern Aleppo province.

The attack took place in Khanaser in southeast Aleppo – a strategic region that links Aleppo with central and western Syria.

The area has changed hands many times during the conflict. But last year, government troops and allied fighters wrested control of Khanaser from ISIL.

The military media arm said ISIL attacked Um Mayyal village near a mountain range in Khanaser and other areas.

Elsewhere, hundreds of Syrians from the rebel-held suburbs of Eastern Ghouta near Damascus protested against infighting that began on Friday and left dozens dead in the area.

The clashes come amid an intensified government offensive in the area near Damascus, which the rebels have controlled for years but has been increasingly squeezed by government advances.

“God rid us of all leaders,” the protesters chanted, criticising the heads of the opposition groups for diverting their weapons from the front line with the government.

The SOHR said ISIL fighters launched the attack on military posts in the area, prompting intense clashes and leaving many casualties.

OPINION: Europe needs to step up its game in Syria

The infighting is pitting the powerful Jaish al-Islam group against al-Rahman Corps and the al-Qaeda-linked Levant Liberation Committee, or Hay’et Tahrir al-Sham.

Each side blames the other for touching off the fighting, seen as a struggle over control of eastern Ghouta.

Some activists have called on Jaish al-Islam to rid Eastern Ghouta of the powerful al-Qaeda-linked group.

The SOHR said shots were fired at the protesters in one area, leaving five injured.

In 24 hours of fighting, the SOHR said at least 38 fighters from rival sides were killed. Damascus-based Shaam News Network put the number at 60, in addition to six civilians killed because of the clashes.

For the past three years, the government has been unable to regain control of the eastern suburbs of Damascus. But in recent weeks, an intensified offensive points to a new determination to retake the area.

On Saturday, activists reported a heavy air campaign against the area’s Qaboun neighbourhood.

Syria’s conflict started as a largely unarmed uprising against Assad in March 2011, but it has since devolved into a full-scale civil war that has killed hundreds of thousands. 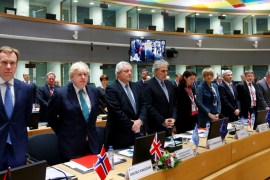 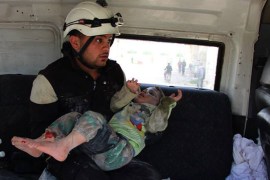 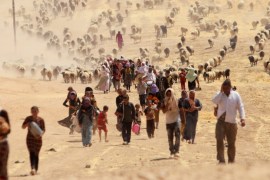 At least 70 killed in Iraq and Syria, Turkish officials say, in blow against Kurdish forces battling ISIL in the region.