Raipur, India – “Grenades and bullets were raining down” on paramilitary policemen in a Maoist attack that killed 25 Indian personnel from the Central Reserve Police Force (CRPF), a surviving constable told Al Jazeera.

The policemen were guarding road workers in the Sukma district, nearly 400km from Raipur, the capital of Chhattisgarh state, when they came under fire on Monday.

Constable Sher Mohammed was part of the more than 100 personnel from the 74th battalion of CRPF deployed in the jungles.

About 300 Maoists – a large number of them women – attacked from all sides while the soldiers were on their lunchbreak.

“We were sitting under the trees for lunch when we heard shots. Before we knew it, bullets were flying around us. Some of our companions were falling like trees crashing down,” said Mohammed, who is recovering in a hospital in Raipur.

“It seemed as if hand grenades and bullets were raining down on us.”

The pain of losing his colleagues was clearly visible on his face as he lay on the hospital bed.

“They used weapons like AK-47 and fired from all sides. That made it difficult for us but we kept firing back,” Mohammed said.

“The distance between us and the Maoists was hardly 100 metres. As I tried to rescue a fellow soldier, seven or eight bullets hit my chest but my bulletproof jacket saved me.”

Monday’s attack was the latest in a long-running conflict between Maoist fighters and Indian forces in the rural areas of mainly central and eastern India.

At least 76 CRPF personnel were killed in a Maoist attack in the same district in 2010.

Tens of thousands of Indian troops have been deployed in the Maoist-affected areas of the country, euphemistically characterised as the “red corridor”, to fight the rebels, who want mining in the mineral-rich region to stop.

More than 20,000 people, the vast majority of them civilians, have been killed since 1980. The violence intensified after the government launched an armed operation in 2009, dubbed “Operation Green Hunt” by the media.

Human rights activists and local journalists, who have accused government forces of abuse and extrajudicial killings, have been attacked and in many cases even jailed.

The Maoists, believed to be present in at least 13 Indian states, say they are fighting for the rights of the adivasi tribal people and the landless farmers against mining in the region.

In a recent statement in parliament, Rajnath Singh, home minister, said the Maoists were frustrated because of the success of recent security operations against them.

Last year, 135 Maoists were killed, 700 were arrested and another 1,198 surrendered to government forces, Singh said, citing figures from NDTV.

Narendra Modi, India’s prime minister, sent his condolences to the families of the soldiers killed in the attack. Singh, for his part, dubbed it a “cold-blooded murder”.

Bhupesh Baghel, from the opposition Congress party, blamed the attack on the lack of coordination between the CRPF and state police.

However, Ramsewak Paikra, Chhattisgarh home minister, denied the claim, saying the development work done by the previous Congress government was the real reason behind the attack.

“The Maoists know that development is limiting the space for them. Maoist use tribals as their shield to prevent development,” Paikra told Al Jazeera.

Civil rights groups have criticised the attack but fear that security forces would “retaliate” by targeting ordinary civilians.

“Consequent arrests, beatings and killings will only intensify the cycles of violence and counter-violence,” said Dr Lakhan Singh, president of the People’s Union for Civil Liberties.

“A situation of civil war still prevails in Bastar [district in Chhattisgarh state] but the Indian government refuses to declare this an ‘internal armed conflict’, perhaps to avoid monitoring by the UN.”

The government has deployed more than 100,000 troops, one third of them paramilitary forces, to root out the five-decade-old armed rebellion. More than 2,000 people have been killed in the state since 1995.

About 35,000 central paramilitary forces and more than 20,000 state police are deployed in Bastar, which is considered a stronghold of the Maoist fighters. 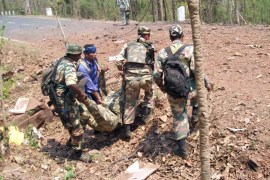 Officials say elite force targeted camp in Odisha near border with Andhra Pradesh where about 60 fighters had gathered. 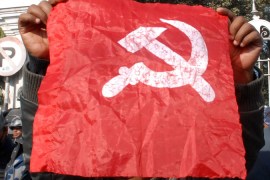 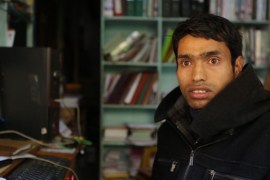