North Korea has blamed the United States and South Korea for the high-profile murder of leader Kim Jong-un’s estranged half-brother in a Malaysian airport.

Kim In-ryong, North Korea’s deputy UN ambassador, told reporters that “from A to Z, this case is the product of reckless moves of the United States and South Korean authorities”.

Washington and Seoul were trying to tarnish the North’s image and bring down its social system, Kim said on late Monday in New York.

Kim Jong-nam was killed at Kuala Lumpur International Airport on February 13 allegedly by two women – an Indonesian and a Vietnamese – who reportedly smeared his face with VX, a chemical classified by the United Nations as a weapon of mass destruction.

The women told diplomats from their home countries they thought they were participating in a prank for reality television.

Malaysian police have since identified seven other North Koreans wanted in connection with the killing, including a senior embassy official in Kuala Lumpur. Four have left the country and are believed to be in Pyongyang.

Ambassador Kim said the cause of Kim Jong-nam’s death “has not yet been clearly identified, but the United States and the South Korean authorities are groundlessly blaming [North Korea]”.

He asked why the person who applied the VX agent, which is fatal if a tiny amount is inhaled, is still alive while the man it was applied to died.

The ambassador said the US is one of the few countries that can manufacture VX and it has stockpiled chemical weapons in South Korea, which could have provided the chemical agent for the attack.

“It is a final aim sought by the United States to store up the international repugnancy towards the DPRK,” he said of the attack, with the intention of provoking a “nuclear war against DPRK at any cost”.

Kim Jong-nam reportedly fell out of favour with his father, the late Kim Jong-il, in 2001 when he was caught trying to enter Japan on a false passport to visit Tokyo Disneyland.

He was not known to be seeking political power, but his position as eldest son of the family that has ruled North Korea since it was founded could have made him appear to be a danger to his half-brother Kim Jong-un. 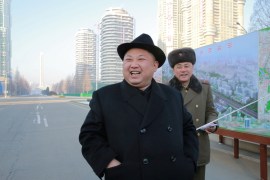