Britain’s upper house of parliament has voted to amend and thereby delay a bill empowering Prime Minister Theresa May to begin negotiations for the UK’s exit from the European Union, or Brexit.

Peers at the House of Lords, an unelected body, voted by 358 to 256 for a change requiring ministers to protect the rights of more than three million European Union and European Economic Area citizens after Britain leaves the bloc.

The change requires the government to publish proposals on how to protect EU citizens currently living in the UK – including their residency rights – within three months of triggering exit negotiations.

May’s Conservatives do not have a majority in the upper chamber.

Al Jazeera’s Paul Brennan, reporting from London, said that the Lords have come under a large amount of pressure in the past couple of days “to stay loyal to the government”.

“They have even been threatened with the idea that further down the pipeline the Lords themselves may soon be abolished if they stood in the way of public opinion on Brexit,” he said.

“What’s clear is that the Lords had sufficient concern about the rights of the EU citizens within the UK to defy the government on this – and by a sizeable majority.”

The defeat is a blow to May, who had hoped to pass the legislation without changes.

“We are disappointed the Lords [upper chamber] have chosen to amend a bill that the Commons (lower chamber) passed without amendment,” a spokeswoman for the Brexit department said in a statement.

While May has said she wants to guarantee EU citizens’ rights, she has not been prepared to do so until other member states agreed to a reciprocal deal.

The government can try to overturn the change using its majority in the lower chamber of parliament, but Wednesday’s vote will delay the final approval of the law.

May is still expected to be able to fulfil her plan to trigger the exit process by the end of the month.

In January, May said Britain must leave the EU’s single market as it exits the bloc.

She said it was necessary to make a clean break and not opt for anything that would leave the country “half-in, half out”. 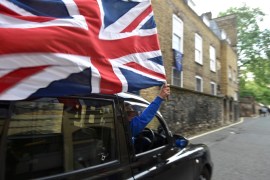