Civilians were “likely” to have been killed in a US commando raid in Yemen over the weekend and children may have been among the dead, the US military’s Central Command (CENTCOM) said.

“A team designated by the operational task force commander has concluded regrettably that civilian non-combatants were likely to have been killed in the midst of a firefight during a raid in Yemen on January 29. Casualties may include children,” CENTCOM said in a statement late on Wednesday.

Yemeni officials had previously said 16 civilians – eight women and eight children – were killed in the raid in the southern province of al-Bayda, but CENTCOM did not provide any numbers.

The civilian deaths appear to have occurred when US aircraft were called to help the commandos as they conducted the dawn raid that US officials said killed 14 members of al-Qaeda in the Arabian Peninsula (AQAP).

“The known possible civilian casualties appear to have been potentially caught up in aerial gunfire that was called in to assist US forces in contact against a determined enemy that included armed women firing from prepared fighting positions, and US special operations members receiving fire from all sides to include houses and other buildings,” the statement added.

Officials were conducting an ongoing “credibility assessment” to see if there may have been additional civilian casualties in the intense firefight, it said.

Since the January 29 raid, Washington has faced questions as to whether an eight-year-old American girl was killed during the firefight.

Local sources have said the girl was the daughter of senior al-Qaeda cleric and US citizen Anwar al-Awlaqi, killed in a 2011 US drone strike.

CENTCOM was mum about the girl’s death.

In a report released shortly after the attack, the International Crisis Group said that al-Qaeda’s branch in Yemen could benefit from the deadly raid and is “stronger than it ever has been”.

“The first military actions by the Trump administration in Yemen bode poorly for the prospect of smartly and effectively countering AQAP,” the report said.

The think-tank warned strikes like the January 29 raid on Bayda province could increase fear of or even hostility towards the US among civilians, providing fertile ground for recruitment by AQAP.

“The use of US soldiers, high civilian casualties and disregard for local tribal and political dynamics … plays into AQAP’s narrative of defending Muslims against the West and could increase anti-US sentiment and with it AQAP’s pool of recruits,” said the Brussels-based ICG.

The January 29 raid against AQAP initially garnered attention because a Navy SEAL was also killed and several more wounded in what marked the first operation of its kind authorised by President Donald Trump.

“This will put more pressure on the administration to be more engaged positively with its allies in the region, including the Yemeni government,” Mahjoob Zweiri, Middle East history professor at Qatar University, told Al Jazeera. “[The US has] to prove the government in Washington is sincere in fighting terror.” 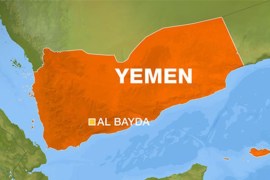 Yemeni civilians killed in first US raid under Trump