US President Donald Trump said he will issue a new executive order to replace his controversial directive suspending travel to the United States by citizens of seven mainly-Muslim countries.

“The new order is going to be very much tailored to what I consider to be a very bad decision,” Trump said.

“We had a bad court. I will not back down from defending our country. I got elected on defence of our country. I keep my campaign promises, and our citizens will be very happy when they see the result.

“We’re issuing a new executive action next week that will comprehensively protect our country.”

Trump gave no details about the replacement order. Legal experts said a new directive would have a better chance of withstanding courtroom scrutiny if it covered some non-Muslim countries and exempted non-citizen immigrants living in the US legally.

The original order, issued on January 27, triggered chaos at some US and overseas airports, led to international protests, complaints from US businesses and drew more than a dozen legal challenges.

At his first solo press conference, Trump insisted there was “zero chaos” in his crisis-buffeted White House and railed against enemies in the media, politics and the courts.

The 70-year-old US president vented frustrations, insisted he is “not a bad person” and wondered out loud about a “nuclear holocaust”, in a remarkable one hour 16 minute ask-me-anything appearance.

“I inherited a mess. It’s a mess. At home and abroad, a mess,” Trump said in a 23-minute opening monologue that bore little resemblance to presidential press conferences of the past.

Claiming his administration “is running like a fine-tuned machine”, the Republican accused the “dishonest” media of stirring-up crises that have sent his approval rating plummeting.

READ MORE: What happens during a deportation raid in the US?

“The tone is such hatred. I’m really not a bad person, by the way,” he said. “I do get good ratings, you have to admit that.”

Meanwhile, a retired navy admiral reportedly tapped by Trump to be his national security advisor has declined the post, US media said.

Robert Harward’s rejection leaves Trump without a replacement for Michael Flynn, who resigned over a scandal involving his links with the Russian ambassador in Washington.

Officially Harward said he had turned down the job because of family and financial commitments.

In four tumultuous weeks, Trump has seen his national security adviser ousted, a cabinet nominee withdraw, a centerpiece immigration policy fail in the courts and a tidal wave of damaging leaks.

“There is zero chaos,” Trump insisted, as he aired a litany of grievances.

“We have made incredible progress. I don’t think there’s ever been a president elected who in this short period of time has done what we’ve done.”

“This is a fine-tuned machine.” 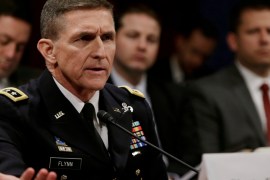 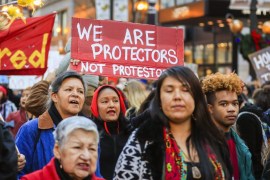 President Trump’s proposal for privatising the CPB could have significant, negative effects on tribal media.