Donald Trump has offered Japan assurances that mutual defence agreements cover the disputed Senkaku Islands, claimed by China, where they are known as the Diaoyu.

After repeatedly questioning defence pacts, the US president signed off on a joint statement with Shinzo Abe, Japan’s prime minister, on Friday that reaffirms US commitment to defend Japan through nuclear and conventional military capabilities.

The pair said they “oppose any unilateral action that seeks to undermine Japan’s administration of these islands” – comments that are sure to anger China.

The statement amounted to a victory for Abe, who came to the US wanting to develop a sense of trust and friendship with the new US president and send a message that the decades-old alliance is unshakeable in the face of a rising China.

Trump said the alliance between the US and Japan was a cornerstone of regional peace and stability, edging away from campaign pledges to force Japan to pay more for the US security umbrella.

Abe and Trump began two days of talks with a hug as Abe entered the White House and more handshakes and smiles in the Oval Office.

They were to depart later for Palm Beach, Florida, for a weekend stay at Trump’s Mar-a-Lago retreat with their wives.

However, at every stage of the meeting between the two leaders, there was awkwardness, said Al Jazeera’s Alan Fisher, reporting from Washington DC.

“It was all very unusual. The protocol in the Oval Office was odd. The handshake between the two men was odd. The conversation between Abe and Trump was slightly odd. And, at the end of it all, Abe even rolled his eyes,” he said.

“At the news conference afterwards, we had the bizarre sight of Shinzo Abe speaking in Japanese and Trump not even listening to the translation.”

Speaking to Al Jazeera, Richard Weitz, an American foreign policy analyst, said: “Some of Trump’s phone calls and other meetings and comments have been more unorthodox.

“This time, he actually tried to adhere to the talking points and the content was very similar to what you could have seen in past engagements.

“I am fairly optimistic about the Japan-US relationship. They can work through the economic and security differences.”

At a joint news conference with Abe, Trump avoided repeating accusations that Japan was taking advantage of US security aid and stealing American jobs.

“We are committed to the security of Japan and all areas under its administrative control and to further strengthening our very crucial alliance,” Trump said.

Japan has had lingering concerns about what Trump’s self-styled “America First” strategy means for US foreign policy in Asia, as well as what his decision to withdraw from the Trans-Pacific Partnership trade pact means for bilateral economic ties.

Trump last month threatened Japanese car manufacturer Toyota with a border tax if it built a planned new factory in Mexico, and the company later announced plans to add 400 jobs at a US plant.

Abe pledged Japan would help create US jobs, hoping to persuade Trump to turn down the heat on economic matters and stand by the alliance.

He even made a pitch to the president for Japanese high-speed rail technology.

Abe said that the latest system could cut travel time to one hour from Washington to New York – noting that the city is home to Trump Tower.

He is the second leader to visit Trump at the White House, following Theresa May, UK prime minister, on January 27, and before Canadian leader Justin Trudeau’s planned meeting on Monday. 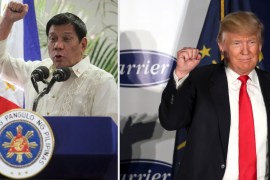 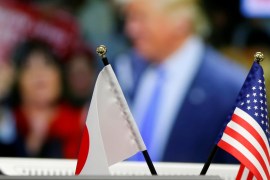