Syrian President Bashar al-Assad has declared that his government is ready to negotiate “on everything” during upcoming talks in Astana, Kazakhstan, brokered by Russia and Turkey.

In an interview with French journalists published by state media on Monday, Assad said there were still questions surrounding the talks, including “who will be there from the other side”.

Turkey has suggested the Astana talks could be convened around the last week of January.

One of the French politicians, Thierry Mariani, who is visiting Syria said Assad also declared himself willing to negotiate with rebel groups fighting against his government, excluding “jihadist” organisations.

Assad said he was “optimistic” and “ready for reconciliation with them on the condition that they lay down their arms,” Mariani said.

And he said the Syrian leader dismissed accusations of war crimes by his forces by saying that no wars were clean.

“There were probably mistakes on the part of the government” that Assad said he would “condemn” and “regret”, Mariani said.

Meanwhile, the Syrian leader blamed “terrorists” for occupying the main water source in the capital Damascus, and has vowed that the military will take it back.

Assad said his forces were on the road to victory, citing the recapture of the city of Aleppo last month as a “tipping point” in the conflict.

“We don’t consider it [retaking Aleppo from the rebels] as a victory. The victory will be when you get rid of all the terrorists,” Assad said in the interview with France Info, LCP and RTL television.

“But it’s a tipping point in the course of the war and it is on the way to victory,” he said in excerpts provided by RTL.

It was his first interview with French media since the December 22 recapture of the rebel-held east of Aleppo, which had been under siege for months.

Rebel forces, who seized eastern districts of the city in 2012, agreed to withdraw after a month-long army offensive that drove them from more than 90 percent of their former territory.

The loss of east Aleppo was the biggest blow to Syria’s rebel movement in the nearly six-year conflict, which has killed more than 310,000 people.

Al Jazeera’s Hashem Ahelbarra, reporting from Gaziantep, said the Syrian opposition was “very concerned” about the latest development on the ground, and whether the ceasefire would hold.

He also reported that opposition fighters do not trust Assad to keep his promise making it “impossible to reconcile” with the Syrian leader.

The violence has displaced more than half the country’s population and caused massive destruction.

Asked about heavy bombing raids that ravaged the city and claimed large numbers of civilian lives, Assad said, in excerpts provided by France Info: “But you have to liberate, and this is the price sometimes.”

He added: “But at the end, the people are liberated from the terrorists” – Assad’s term for all fighters opposed to his rule.

“Of course it’s very painful for us as Syrians to see any part of our country destroyed, or to see any bloodshed anywhere,” he said, adding: “Every war is bad.”

The Syrian president asked, “Is it better to leave (civilians) under their (rebels’) supervision, under their oppression, by beheading, by killing?” 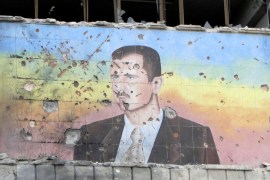 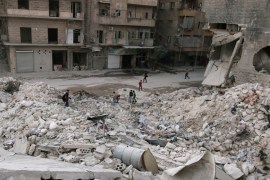 At least 9,364 people, including 3,800 civilians, have been killed in 12 months of Russian raids, Syria monitor says.