Suicide bombings at two marketplaces in eastern Baghdad killed at least 20 people – the latest in a spate of attacks in the Iraqi capital that have left dozens dead in recent days.

In the first blast claimed  by Islamic State of Iraq and the Levant (ISIL),  the attacker drove an explosives-rigged car into a vegetable market in the mainly Shia district of Jamila and detonated it, killing at least 13 people, police said.

A suicide bomber wearing an explosive vest blew himself up a few hours later at a market in the mostly Shia district of Baladiyat, killing another seven people.

Both attacks wounded at least 50 people.

ISIL claimed the first attack in an online statement saying the bomber had targeted “a gathering of Shia” in Jamila.

Jamila is the main wholesale vegetable market in Baghdad and lies in Sadr City, which has been repeatedly targeted.

A series of attacks in Baghdad and other Iraqi cities have killed more than 80 people in just over a week.

Several have been claimed by ISIL, also known as ISIS, which is coming under increasing pressure from a military offensive in Mosul, its last major stronghold in Iraq.

On January 2, also in Sadr City, a suicide bomber blew up a vehicle packed with explosives among a crowd of day labourers waiting for work, killing 35 people.

In July 2016, an ISIL car bombing at a shopping district during Ramadan killed almost 300 people, the worst such attack in years . 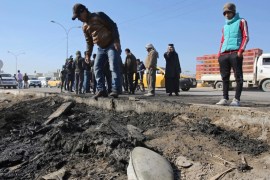 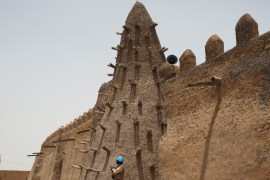 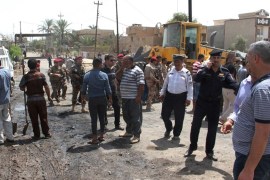