Flash floods have killed at least 18 people in Thailand as heavy rains continued to ravage the country’s south.

The flooding, which is roof-high in some areas, affected more than 700,000 people since it started a week ago, Thailand’s interior ministry said in a statement on Saturday.

At least 18 people have died and one is missing, it added, with the rains turning roads into rivers, inundating farmland, and damaging more than 1,500 schools in the region.

The downpour is expected to persist for at least two more days, according to Thailand’s Meteorological Department, which warned of more flash flooding.

In hard-hit Nakhon Si Thammarat province, two army helicopters were deployed to airlift food to families trapped inside their homes.

Bapha Suthiphanya, a 60-year-old who has spent the past three nights in a makeshift government shelter, said she was forced to evacuate her home after the waters rose above her head.

“I was so shocked and scared. I’ve never seen water like this and I also cannot swim,” she told AFP news agency.

The rain is unusually strong for this time of year in the region, which normally sees a three-month long stretch of relatively dry and cool weather from November through to January.

It is high season for tourists who flock to the Thailand’s island resorts, powering a crucial sector of the economy.

But the deluge has already disrupted beach holidays in several traveller hotspots, including the popular islands of Samui and Phangan.

Hundreds of tourists have had their flights delayed, while train and bus services on the mainland have also been suspended in flood-hit areas.

Yet some travellers are refusing to let the storm stop the fun, with photos circulating on social media of tourists coasting through flooded streets on pool floats. 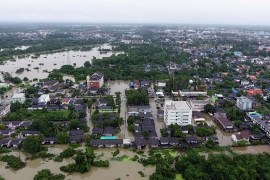 Several days of torrential rain have resulted in the deaths of at least eight people.