Protests against right-wing US President Donald Trump’s ban on refugees and immigrants from several Muslim-majority countries have been held in cities across the United States, including in New York City and Washington, DC.

In the US capital, thousands gathered outside the White House, while more than 1,000 protesters assembled in New York City’s Battery Park to demonstrate against Trump’s executive order, which places harsh restrictions on immigration from seven Muslim-majority countries.

Thousands out at the White House to protest the #MuslimBan @DemSocialists pic.twitter.com/u7uOc49L7T

Speaking to Al Jazeera in Battery Park, Hizam Mohammed Saleh, a 45-year-old of Yemeni descent, said: “I came here because I want peace for everyone, for the immigration law to be the same for everyone.”

Jessica Taube, 37, brought her children to the protest. “I don’t believe in borders. We’re all humans and we all share the same world and deserve a place to be happy and healthy,” she told Al Jazeera.

“I have my kids here because I want them to learn that … In this era of Trump, that’s what is going to save us – community.”

A day earlier, thousands of protesters amassed at airports across the country as news spread that immigrants and travellers were being detained there. Among those held were legal residents who carry US green cards.

Demonstrators only dispersed when a federal judge blocked part of Trump’s executive order on immigration, ruling that travellers who have already landed in the US with valid visas should not be sent back to their home countries.

Lawyers had filed a legal case in response to the order that includes a 90-day entry ban on citizens of Syria, Iraq, Somalia, Sudan, Iran, Libya and Yemen.

US District Judge Ann Donnelly’s ruling late on Saturday concerns dozens of people who were held at airports following Trump’s actions. The total number of people held was unclear.

Some reports said immigration authorities were still implementing the ban sporadically in a number of airports.

Attorney generals from 16 US states – including California, New York and Pennsylvania – issued a joint statement on Sunday condemning Trump’s move.

“We are committed to working to ensure that as few people as possible suffer from the chaotic situation that it has created,” the statement said.

US senators John McCain and Lindsey Graham, both from Trump’s Republican Party, said on Sunday that the president’s order may do more to help recruit “terrorists” than improve US security.

“Ultimately, we fear this executive order will become a self-inflicted wound in the fight against terrorism,” they said in a statement, adding that the US should not stop green card holders “from returning to the country they call home.

“This executive order sends a signal, intended or not, that America does not want Muslims coming into our country. That is why we fear this executive order may do more to help terrorist recruitment than improve our security,” said McCain, of Arizona, and Graham, of South Carolina.

The top Democrat in the US Senate said on Sunday that he will push legislation to undo the discriminatory ban.

Senator Chuck Schumer called the executive order “mean-spirited and un-American” and said it must be reversed immediately.

He and senior aides sought to defend the policy and play down the chaos sparked by Friday’s order.

US Homeland Security Secretary John Kelly said in a statement that people from the seven countries who hold green cards as lawful permanent US residents would not be blocked from returning to the United States from overseas, as some had been after the directive.

“Our country needs strong borders and extreme vetting, NOW. Look what is happening all over Europe and, indeed, the world – a horrible mess!” Trump wrote on Twitter on Sunday. 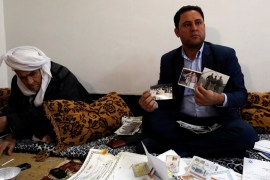