President Donald Trump’s administration has instituted a media blackout at the country’s Environmental Protection Agency (EPA) and barred staff from awarding any new contracts or grants, according to the Associated Press news agency.

Emails sent to EPA staff since Trump’s inauguration on Friday, and reviewed by The Associated Press, detailed the specific prohibitions banning press releases, blog updates or posts to the agency’s social media accounts, the news agency reported on Tuesday.

The Trump administration also ordered a “temporary suspension” of all new business activities at the department, including issuing task orders or work assignments to EPA contractors, it said.

The orders are expected to have a significant and immediate effect on EPA activities nationwide.

The EPA did not respond to phone calls and emails requesting comment on Monday or Tuesday, AP added.

Meanwhile, during a meeting with executives from the car industry, Trump described himself as an environmentalist.

He did not elaborate on why he views himself as an environmentalist, but the comments came after urging companies from the car industry and beyond to bring jobs back to the US.

On Monday, he made similar comments at a business breakfast, stating again without elaborating, “I’m a very big person when it comes to the environment. I have received awards on the environment.”

On Tuesday, Trump signed two executive orders to advance the Keystone XL and the Dakota Access pipelines, drawing outrage from activists who have serious concerns over the potential damages to land and water sites that the oil-carrying pipelines could cause.

Erich Pica, the president of Friends of the Earth, a network of environmental organisations, condemned Trump’s move in a statement sent to Al Jazeera on Tuesday.

She accused the president of pledging “his allegiance to the oil companies and Wall Street banks that stand to profit from the destruction of public health and the environment”. 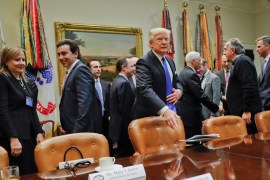 Is Donald Trump against free trade?

US President Trump withdraws from Trans-Pacific Partnership, saying the agreement harms the US.