A US air strike on Thursday targeting an al-Qaeda training camp in Syria killed more than 100 fighters, a US defence official said on Friday.

The strike took place just a day before the end of President Barack Obama’s presidency and a day after more than 80 fighters of the Islamic State of Iraq and the Levant (ISIL, also known as ISIS) were killed in US air strikes in Libya, according to the Pentagon.

The official, speaking on the condition of anonymity, said the air strike in Syria was primarily carried out by a B-52 bomber and dropped 14 munitions.

The official added that the strike against the camp took place in Idlib province, west of Aleppo, and there was a high level of confidence that there were no civilian casualties.

A US-led coalition has been carrying out air strikes and supporting local forces in Syria to oust ISIL.

It was not immediately clear if this strike was the same one to which the US defence official was referring.

A source in Fateh al-Sham confirmed to Al Jazeera that dozens had died in air strikes on a training camp in western Aleppo’s countryside.

Jabhat Fateh al-Sham split from al-Qaeda in July, a move that analysts said was aimed at easing pressure from both Russia and the United States.

However, the group is not party to a Russian and Turkish-brokered ceasefire that went into effect on December 30.

OPINION: Tough choices ahead as al-Nusra splits from al-Qaeda

According to the Syrian Observatory, the group has sustained major losses in recent weeks with about 100 of its fighters killed since the start of 2017.

Al Jazeera’s Stefanie Dekker, reporting from Gaziantep near the Turkey-Syria border, said the latest air strikes signalled a change in the campaign against the group.

“At least 10 senior commanders of the group have been killed among countless other fighters in Idlib province,” she said.

“This raises the question of whether there is a change in policy, or if there’s more intelligence coming in from the ground pinpointing where these leaders are.”

The Syrian conflict started in March 2011 as a largely unarmed uprising against President Bashar al-Assad and quickly emerged into a full-scale civil war. 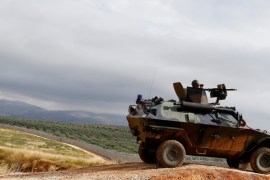 The attack comes on the same day Turkey said it is no longer ‘realistic’ to exclude Assad from a solution. 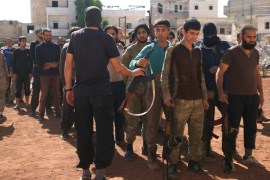 At least 40 fighters from Jabhat Fateh al-Sham killed in Aleppo province at a training camp attack.