Daniel Ortega has been sworn in for a third consecutive term as Nicaragua’s president, with his wife Rosario Murillo as the new vice president, giving a married couple the reins of power for the first time in the Central American country’s history.

Ortega, a 71-year-old former rebel fighter, took the oath in Managua with the presidents of Venezuela, Bolivia and Taiwan in attendance.

Ortega and Murillo were elected in November with 72.5 percent of the vote, but with a high rate of abstentions. Their party won 71 of the 92 seats in parliament.

Nicaragua could face economic challenges in Ortega’s third five-year term amid a steep drop in aid from Venezuela, which has funded many social programmes.

A law is also being considered in the US that could block Nicaragua’s access to loans from international lending organisations, pushed by US legislators claiming a critical of a lack of government transparency.

Economists and business leaders say Ortega will now have to be more transparent, especially with the US Congress already considering sanctions.

Al Jazeera’s John Holman, reporting from the capital, said the election win was no surprise, but the future is less certain.

“Ortega can no longer rely on petrodollars from struggling ally Venezuela and Nicaragua’s top trading partner, the US, has a new, unpredictable administration,” he said.

“And just at the point when he would look to build international bridges, more and more countries are increasingly disapproving of his strong-arm tactics.”

Ortega was one of the leaders of the rebel Sandinista movement that ousted the four-decade Somoza family dictatorship in 1979.

With Ortega’s wife joining him in office, there are growing concerns his rule could become more authoritarian.

Sonia Chavez, who fought alongside Ortega’s Sandinista movement when it toppled the Samoza regime in the 1980s, says he is now just like the man he helped depose.

“We fought to get rid of a brutal dictatorship that we didn’t want and now we’re going back to one again,” she told Al Jazeera. 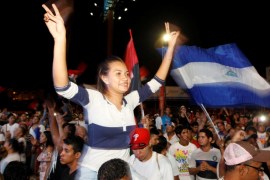 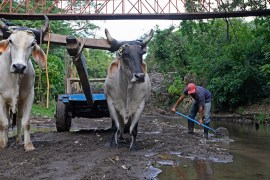