Hamas has presented a new political document that accepts the formation of a Palestinian state along the 1967 borders, without recognising the statehood of Israel, and says that the conflict in Palestine is not a religious one.

The positions were made official on Monday in Qatar’s capital, Doha, by Khaled Meshaal, the leader-in-exile of the Palestinian group that runs the besieged Gaza Strip.

“We shall not waive an inch of the Palestinian home soil, no matter what the recent pressures are and no matter how long the occupation,” Meshaal said as he revealed the document to the public after two years of work.

Hamas has been accused of being dogmatic, and living in a straitjacket.

[Meshaal] made it clear that the new Hamas, if you will, is dynamic and open-minded.

He said their philosophy and the philosophy behind writing a new charter is that “we are going to be a dynamic and open organisation”.

He also said that they will have a dual strategy.

[Meshaal] said that all of that is stemming from Hamas’ experience, not only over the past three decades, but particularly over the past 10 years, when Hamas was actually governing after it won the elections of 2006.

So I think the approach … “we are open, we are changing and we might have a new charter moving forward”, means that they are open to dialogue and compromise.

“Hamas rejects any idea except liberating the home soil entirely and completely, although it does not necessarily mean we recognise the Zionist entity or give up any of our Palestinian rights.”

But it does not go as far as to fully recognise Israel and says Hamas does not relinquish its goal of “liberating all of Palestine”.

“Hamas considers the establishment of a Palestinian state, sovereign and complete, on the basis of the June 4, 1967, with Jerusalem as its capital and the provision for all the refugees to return to their homeland is an agreeable form that has won a consensus among all the movement members,” Meshaal said.

The document also falls short of accepting the two-state solution that is assumed to be the end product of the Oslo Accords between Israel and the Palestinian Liberation Organization (PLO).

It also clarifies that Hamas’ fight is with the “Zionist project”, not with the religion of Judaism, making a distinction between those who believe in Judaism and “Zionist Israeli citizens who occupy Palestinian lands”.

It also sidesteps language in the group’s original charter that affirms its connections to the Muslim Brotherhood, and says that Hamas is a fully independent organisation.

Analysts said the release of the document appears to be an attempt by Hamas to seem more pragmatic and help it to avoid international isolation.

Speaking to Al Jazeera, Mohammad Abu Saada, a professor at Gaza’s al-Azhar University, called the new document a bid to “accommodate Egyptian conditions and calm Egyptian fears” regarding Hamas connections to the Muslim Brotherhood, which Egypt has classified as a “terror” group since democratically elected president Mohammad Morsi was ousted in a 2013 military coup.

While in the 1988 charter Hamas affirmed its ties to the Muslim Brotherhood by mentioning it six times, the new document asserted Hamas strict Palestinian credentials as a “liberation movement” that uses Islam as its main ideological component.

“Hamas is trying to walk a fine line between its hardliners and its own moderates,” said Abu Saada of al-Azhar University.

“In one way, the moderates can say they accepted a Palestinian state on the 1967 borders, but the hardliners can still say they are not recognising Israel.”

Azzam Tamimi, author of “Hamas: A History from Within”, told Al Jazeera that while Hamas leaders were unlikely to say so, the new document would “practically” replace the group’s old charter.

“They would prefer to say that the old charter expressed Hamas in 1988, and that now, Hamas is a different organisation. It has different insight and understanding of the conflict and that today’s document is what speaks for Hamas today.”

Hamas has controlled the Gaza Strip since 2007, after winning elections and forcefully pushing its Fatah rivals out. Since then, Gaza has suffered three major Israeli assaults, whick killed more than 3,500 Palestinians, and a crippling 10-year-long siege.

“The question is whether this change will do anything to try and lift the blockade, or anything to get this struggling economy back on its feet,” said Al Jazeera’s Harry Fawcett, reporting from Gaza City.

Israeli officials rejected the document before it was made official, calling it an attempt by Hamas to trick the world into believing it was becoming a more moderate group.

“Hamas is attempting to fool the world but it will not succeed,” said David Keyes, a spokesman for Israeli Prime Minister Benjamin Netanyahu’s office.

The document’s release comes just days ahead of Palestinian Authority (PA) President Mahmoud Abbas’ visit to Washington on May 3 and as US President Donald Trump’s administration prepares a new push to forge peace between the Palestinians and the Israelis.

Abbas and his Fatah party have long pushed for a Palestinian state along the 1967 borders, and have engaged in talks with Israel on that basis.

But Israel has frequently refused to enter into political talks with Abbas’ PA on the grounds that they do not represent all Palestinians.

Mustafa Barghouti, leader of the Palestinian National Initiative, told Al Jazeera that this move by Hamas reflected a level of “political maturity”.

“Acceptance of a Palestinian state along the 1967 borders … means accepting a two-state solution. In my opinion this is going to embarrass Israel a lot,” said Barghouti.

“We’ve seen the Israeli reaction, which looks very frightened, first of all from the greater possibility of Palestinian unity, but also … of peace and the possibility of peace.”

With reporting by Ali Younes in Doha 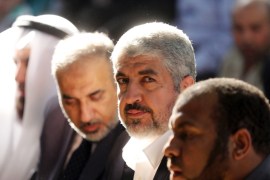 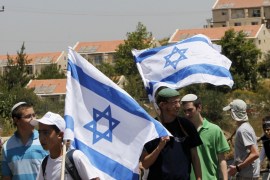 Have settlements killed a two-state solution?