Turkish forces and Syrian rebels have driven out the Islamic State of Iraq and the Levant (ISIL) group from its remaining territory along the Syrian-Turkish border, Turkey’s Prime Minister Binali Yildirim had said.

Speaking from the southeastern city of Diyarbakir, Yildirim said on Sunday that Turkish troops and Ankara-backed Free Syrian Army fighters had cleared the area between the northern Syrian towns of Azaz and Jarablus.

“Our 91km border has been completely secured,” he said during a televised speech. “All terrorist organisations have been repulsed and they have gone.”

Earlier, Turkey’s state-run Anadolu news agency had said that the advance had “removed terror organisation Daesh’s physical contact with the Turkish border in northern Syria”.  Daesh is an Arabic acronym for ISIL, also known as ISIS, or IS.

The Syrian Observatory for Human Rights also said on Sunday that ISIL “had lost its contact with the outside world after losing the remaining border villages between the Sajur River … and Al-Rai”.

The UK-based group, which monitors daily developments in the war, said “rebels and Islamist factions backed by Turkish tanks and warplanes” had taken several villages on the border “after IS withdrew from them, ending IS’s presence … on the border”.

Al Jazeera’s Hashem Ahelbarra, reporting from the city of Elbeyli on the Turkish side of the Syria-Turkey border, said the rebels’ offensive had forced “ISIL fighters to pull out towards al-Bab, which is their last remaining stronghold in northern Syria”.

Sunday’s development came a day after rebel factions took control of a number of villages in the area, without meeting any resistance from ISIL fighters.

“There are no clashes, ISIL fighters flee as soon as they see us advancing, especially because we are supported by Turkish air power,” Ahmed Othman, a commander in the pro-Turkey rebel group Sultan Murad, told Al Jazeera from Aleppo’s northern suburbs on Saturday.

The loss of the area near the Turkish border will deprive ISIL of a key transit point for recruits and supplies, though the group continues to hold territory in both Syria and Iraq.

Last week, Turkey launched its first major incursion into neighbouring Syria since the civil war began more than five years ago.  After crossing the border on August 24, Turkish-backed Syrian rebels captured the border town of Jarablus from ISIL in 14 hours. 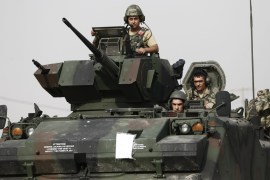