Manila, Philippines – International and local journalists’ groups have strongly condemned online threats made by alleged pro-government supporters to at least two female journalists in the Philippines, urging President Rodrigo Duterte to launch an investigation and penalise the perpetrators.

The two Manila-based journalist became targets of social media attacks in recent days, receiving threats of rape and harm to them and their families.

They had been reporting on Duterte’s anti-drug war, as well as the military operation against the armed group Abu Sayyaf.

Since June 30, when Duterte took office, more than 3,500 people have been killed in police operations and by unknown attackers.

“The IFJ expresses serious concerns for the safety of media employees working in the Philippines,” the groups said in a statement.

“Threats delivered to journalists via social media must be taken seriously by the government and perpetrators must be penalised accordingly so as to ensure the safety of journalists.”

Shawn Crispin, senior Southeast Asia representative at Committee to Protect Journalists, told Al Jazeera: “We are increasingly concerned by threats made to journalists, including over social media, for their coverage of the drug war in the Philippines.

“Philippine officials, including President Duterte, have jeopardised the security of journalists by accusing them of misrepresenting or being supported by drug lords to critically portray the campaign.

“They should immediately cease and desist from such veiled threats and instead work to reveal and punish those who use social media to anonymously threaten journalists.”

In a separate statement, the Philippine journalist group NUJP said that while the media “always welcome engagement, including criticism, from their audience”, the threats “have gone beyond legitimate criticism of their professional output to outright threats on their persons”.

“We will never take any threats, whether of physical harm or to silence us, lightly for we have lost far too many of our colleagues and hardly seen justice for them,” NUJP chairman Ryan Rosauro said.

The group said it is hoping the special unit formed by Duterte to investigate media killings and other media threats could “prove its worth” in looking into the latest cases.

The Philippines remains one of the most dangerous countries for practising journalists, with 145 media workers killed since 1990.

Duterte, himself, has been known to denounce journalists for their coverage of his drug war.

He has previously cursed foreign journalists for their reporting, and has said that corrupt journalists are legitimate targets of assassination.  .

A self-confessed hitman from Davao, the hometown of Duterte, recently told a Senate committee hearing that the then-mayor had ordered the  killing of a radio commentator who was critical of him.

Before taking office, Duterte was also quoted as saying that the commentator, Jun Pala, was “a rotten son of a whore”, who “deserved” to be killed.

But Duterte previously said that he welcomed questions from the media. “I have nothing against you. I am not at liberty to [be] angry at anybody,” he said. 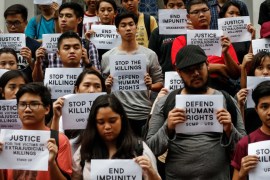 Can Rodrigo Duterte win the war on illegal drugs?

Philippine president lashes out at the UN for criticising his anti-crime campaign and reported extra-judicial killings. 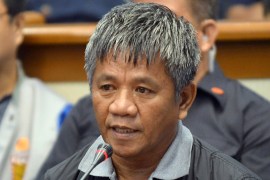