Tens of thousands of Catalans gathered in Barcelona and four other cities for mass rallies to demand their region break away from Spain, as pro-independence leaders try to iron out differences over a secession plan.

More than 340,000 people have signed up to join Sunday’s demonstrations, scheduled to coincide with Catalonia’s national day, the “Diada”, which marks the conquest of Barcelona by Spain’s King Philip V in 1714 after a 13-month siege and the loss of Catalan autonomy.

In Barcelona the crowd, many drapped in blue, red and yellow separatist banners, assembled in the Ciutadella park ahead of the rally and held up yellow cardboard signs to simulate the beating of giant heart.

The run-up to the protest has coincided with a rift between separatist parties just as they target independence for the wealthy northeastern region in mid-2017.

This year’s Diada is crucial, the head of the regional government of Catalonia, Carles Puigdemont, said before the rallies started.

In the coming months “critical decisions” regarding Catalonia’s future will have to be taken, he told a meeting with foreign journalists.

Catalan separatists have tried in vain for years to win approval from Spain’s central government to hold an independence referendum like the one held in 2014 in Scotland in Britain which resulted in a “no” vote.

After winning a clear majority in Catalonia’s regional parliament for the first time ever last year, secessionist parties changed tactics and approved a plan to achieve independence in mid-2017.

But the plan ran into trouble in June when Puigdemont’s coalition government lost the support of the tiny anti-capitalist party CUP, which has a hard line on independence.

As a result it lost its clear majority in the assembly.

OPINION: The winners and losers in Spain’s political deadlock

The pro-independence camp hopes Sunday’s mass protest will reunite and breathe new life into their campaign, which is moving along more slowly than many of its supporters would like.

Since 2012, major demonstrations in favour of independence have been held in Catalonia every year on its national day on September 11.

In 2013, hundreds of thousands of Catalans draped in blue, red and yellow separatist banners held hands in a 400-kilometre (250-mile) human chain across the region, while in 2014 and 2015 demonstrators held massive rallies in Barcelona.

Catalans have nurtured a separate identity for centuries, but an independence movement surged recently as many became disillusioned with limitations on the autonomy they gained in the late 1970s after the Francisco Franco dictatorship, which had suppressed Catalan nationalism.

Spain’s recent economic downturn exacerbated the situation, leaving many resenting the amount of taxes they pay to the central government in Madrid to subsidise poorer regions.

Puigdemont faces a confidence vote on September 28, in the wake of Sunday’s demonstrations seen as a test of the unity of the separatist drive.

The CUP, having withdrawn support in June, is willing to back his government again, most likely if he agrees to call an independence referendum in 2017. 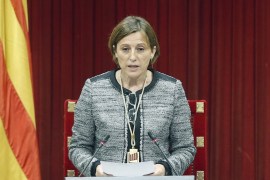 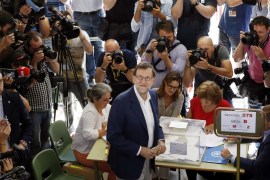 Can the political deadlock be broken in Spain?

Spaniards voted for a second time in six months following failure to form a government.