Donald Trump’s campaign spokesman has denied allegations that the Republican presidential nominee had advocated the assassination of his Democratic rival Hillary Clinton.

In a speech on Tuesday, Trump suggested that gun owners or those backing gun rights could stop Clinton from winning the White House and picking new US Supreme Court justices.

“Hillary wants to essentially abolish the Second Amendment,” Trump told a rally in Wilmington, North Carolina on Tuesday, referring to the US Constitution’s clause that enshrines the rights of Americans to bear arms.

“If she gets to pick her judges, nothing you can do folks,” Trump said. “Although the Second Amendment people – maybe there is, I don’t know.”

It was not immediately clear exactly what Trump meant by his remarks, but US media and social media users quickly expressed concern that Trump was promoting that Clinton or the judges could be assassinated.

The Trump campaign swiftly issued its own statement to clarify that the Republican presidential nominee’s remarks, branding the media as “dishonest” and saying he meant that gun rights advocates were a powerful voting force.

“And this year, they will be voting in record numbers, and it won’t be for Hillary Clinton, it will be for Donald Trump.”

“A person seeking to be the president of the United States should not suggest violence in any way,” Mook said.

The Republican nominee has repeatedly bashed his Democratic opponent for seeking to abolish gun rights.

Clinton has stressed that she wants to impose stricter limits on gun sales so that weapons do not fall into the hands of people who should not have them, like criminals, the mentally unstable, or those on government terror watch lists.

Democratic Senator Chris Murphy of Connecticut, the state where 20 schoolchildren and six adult staff were shot dead by a deranged gunman at an elementary school in 2012, issued a stern rebuke of Trump for his comments.

“Was @realDonaldTrump suggesting his supporters shoot Hillary? Shoot her nominee? Who knows. It’s all so disgusting and embarrassing and sad,” Murphy tweeted.

“This isn’t play. Unstable people with powerful guns and an unhinged hatred for Hillary are listening to you, @realDonaldTrump,” Murphy tweeted. 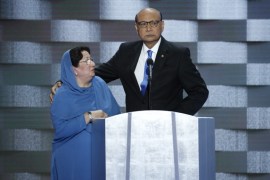