Thailand has voted to accept a military-backed constitution, according to preliminary results, despite claims by opponents that it will entrench the military’s power and deepen divisions.

With 94 percent of the vote counted on Sunday, results from the Election Commission showed 61.4 percent of the country had voted for the charter, while 37.9 percent rejected it. Full results are due on Wednesday.

“The gap is wide enough not to change the result,” Somchai Srisutthiyakorn, chairman of the commission, told reporters after 90 percent of the vote count had been completed.

Voter turnout was just over 50 percent.

“In any normal situation, or course, you would say, well that’s democracy and that’s how things work, a turnout of over 50 percent is a fairly clear margin – case closed,” Al Jazeera’s Wayne Hay, reporting from Bangkok, said..

“But, of course, this was not a normal situation.

“In the lead-up to this referendum there were some very harsh laws put in place by the military government  banning any public debates or criticism of the referendum or the constitution … Indeed many people were arrested,” Hay said.

“So to a certain extent, for opposition figures, for critics of the military, there was something of a climate of fear leading up to this. So it certainly wasn’t a normal situation.”

Critics, including Thailand’s major political parties, have said that the constitution is undemocratic.

The vote now paves the way for a general election promised by the military government in 2017, but the newly adopted constitution requires future governments to rule on the military’s terms.

The most divisive clauses in the constitution calls for a military-appointed senate – including six seats reserved for military commanders – which will act as a check on elected members of parliament.

Critics fear that the appointed senate will straitjacket elected politicians

One clause in the draft constitution also allows for an unelected prime minister to take power in the event of a political crisis – which is what happened when Thailand’s army chief Prayuth Chan-ocha, now prime minister, grabbed power in a coup in 2014.

After casting his vote in Bangkok earlier on Sunday, Prayuth urged people to vote, adding: “This is democracy so all eligible voters please come out.”

Ironically, Prayuth had banned open debate on the constitution and scores of people were arrested in the lead-up to the vote.

Only the impoverished and rural northeast of the country – a region that has voted in droves for successive governments turfed out by the Thai army – voted against the charter. 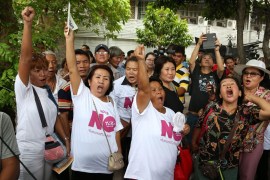 Arrests and detention of loyalists of ex-PMs Thaksin and Yingluck come ahead of August 7 charter referendum. 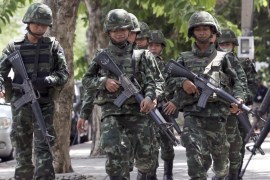 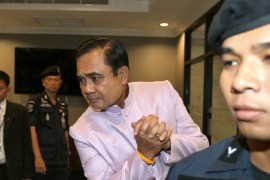