A day after Turkey’s failed coup attempt, all major political parties united against the “unparalleled attack on the Turkish democracy”, issuing a joint declaration to condemn it.

“Faced with the threat of a Gulenist coup, everyone left aside their political differences and joined hands to make sure that never again will the people be stripped of their right to choose their leaders,” a senior government official told Al Jazeera.

President Recep Tayyip Erdogan also put aside acrimony with the leaders of two opposition parties, inviting them to the presidential palace for talks in a gesture of national unity.

And a week after their historic meeting at the presidential palace on July 25, in an unprecedented move, Erdogan invited Republican People’s Party (CHP) leader Kemal Kilicdaroglu and Nationalist Movement Party (MHP) leader Devlet Bahceli to join him in a major “democracy rally” in Istanbul’s Yenikapi Square.

We do not see any indication that the HDP's political exclusion is going to end anytime soon.

“Let the nation be there together,” Erdogan told Turkey’s state-run Anadolu Agency before Sunday’s rally. “Accelerating the process of normalisation is extremely important for our country.”

But the leader of the pro-Kurdish Peoples’ Democratic Party (HDP), Selahattin Demirtas, was excluded from both the post-coup talks in the palace and the rally, on the grounds that his party allegedly supports the outlawed Kurdistan Workers’ Party (PKK). The HDP’s exclusion, however, has given rise to concerns that Turkey is denying a large section of society representation in discussions about the nation’s future.

“We can see that he [Erdogan] is purposefully absenting himself from a meeting with Demirtas, with the HDP,” said Tarik Celenk, a retired major and the founder of Ekopolitik, a conservative think-tank that aims to create dialogue between Turkish and Kurdish nationalists.

“In the past, I personally observed what a considerable impact Demirtas had on the civil society,” Celenk told Al Jazeera. “I think it is regrettable to exclude him and his party from these talks.”

WATCH: Erdogan – Will do everything for stability of Turkey

The failed coup attempt by a faction of the Turkish military on July 15 killed more than 270 people and posed the gravest threat yet to Erdogan’s 13 years in power.

Loyalist factions in the security forces, with the help of thousands of Turkish citizens who took to the streets after a call for help from the president, quickly put down the coup attempt, but the repercussions continue to ripple throughout Turkish society.

The Turkish government has blamed US-based cleric and businessman Fethullah Gulen, a former Erdogan ally, of masterminding the incident, and has detained or suspended more than 60,000 people in the military, judiciary, civil service and education for alleged links to his movement.

Demirtas himself has criticised Erdogan’s refusal to talk to the HDP after the coup attempt, claiming that what brought together the ruling AK party, the MHP and the CHP was their shared “nationalism”.

“All three want Turkey to unite under the banner of the same sect and speak the same language. They want Turkey to become a single light bulb,” Demirtas told HDP supporters at a recent rally in Van, referring to the AK party’s logo, which features a brightly shining light bulb. “They don’t want to talk to us about anything.”

Erdogan has previously called for members of the HDP to face prosecution, accusing them of being the PKK’s political wing. Turkey, the United States and the European Union designate the PKK, an armed group that has been fighting for Kurdish autonomy since 1984, as a “terrorist organisation”.

The HDP, parliament’s third-biggest party, denies direct links with the PKK and promotes a negotiated end to the Kurdish conflict, which has claimed hundreds of lives since a peace process, once led by Erdogan and the AK party, collapsed in 2015.

“Nothing positive has happened since the failed coup attempt,” Saruhan Oluc, vice president of the HDP, told Al Jazeera. “The president is maintaining the same accusatory, exclusionist attitude towards the HDP that he had since the June 2015 general elections.

“They do not want to include the HDP in these post-coup meetings,” he added, “because they do not want the Turkish public to change its negative perception of the HDP – a perception that was constructed [by the government]. We do not see any indication that the HDP’s political exclusion is going to end anytime soon … We don’t have any reason to be hopeful about a peace process.”

Analysts agreed that Erdogan’s decision to snub Demirtas, who strongly condemned the coup attempt, at a time of perceived national solidarity shows that a renewed Kurdish peace process will not be on the cards in the near future.

“After the coup attempt, Turkish people’s priority is safety,” Ali Faik Demir, an expert on Turkish politics and foreign policy at Istanbul’s Galatasaray University, told Al Jazeera. “It won’t be possible for the government to negotiate a peace deal in this environment.”

The coup’s aftermath saw a short-lived cessation in violence in the mainly Kurdish southeast, but late last month, Turkish military forces announced that they had killed 35 Kurdish fighters who attempted to storm a military base in the border province of Hakkari.

At the moment, after the failed coup attempt, Turkey's threat perception is higher than ever before.

After the clash, which also claimed the lives of eight Turkish soldiers, the government renewed its vows to eradicate the PKK, as thousands of Turks took to social media to call for a “cull” of “terrorist elements” in the southeast.

“At the moment, after the failed coup attempt, Turkey’s threat perception is higher than ever before,” Demir said. “So it is understandable for Turkey to respond to any internal or external threat swiftly and brutally. This includes the activities of the Kurdish insurgency.”

Celenk, of the Ekopolitik think-tank, however, warned that this approach may cause further problems for the Turkish government in the long term.

“One of the factors that led to the failed coup attempt was the suspension of the attempts to find a political solution for the Kurdish problem,” he said. “The decision to suspend the peace talks restricted the influence of the political sphere and strengthened the hand of the military bureaucracy. So, to avoid a similar attack on the democracy in this new era, it is essential for the government to find a political solution to the Kurdish issue.”

The Turkish government, meanwhile, says it is not shying away from solving the problems of the Kurdish community, noting it is simply fighting against the PKK, a “terrorist organisation”.

“Even though the PKK  ended a two-year ceasefire in July 2015, we did not backtrack on any of the reforms. In this sense, we make a clear distinction between PKK, which targeted police officers trying to stop the coupists on July 15, and the Kurdish community, whose members took to the streets to defend our democracy.”

Analysts agreed that Turkey must distinguish between the PKK and the broader Kurdish community, but criticised the government’s reluctance to work with political representatives of the Kurdish movement, especially during a time of “solidarity”.

If Turkey wants to be a solid democracy, an influential actor in the Middle East and a player in the battle against the Islamic State of Iraq and the Levant group (ISIL, also known as ISIS), it must solve the Kurdish problem once and for all, Celenk said.

“The government has to create a shared vision with Turkey’s Kurds,” he said. “It is the only way Turkey can be a safe place within, and in the international arena.” 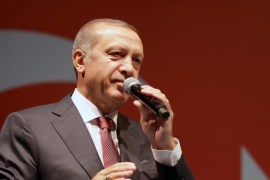