A suspected suicide car bomber rammed the gates of the Chinese embassy in the capital of Kyrgyzstan, Bishkek, according to authorities.

“As a result of the explosion, only the suicide bomber terrorist died,” Kyrgyzstan’s Deputy Prime Minister Jenish Razakov told journalists at the scene of Tuesday’s blast.

Razakov also said that three Kyrgyz employees of the embassy were in hospital after being wounded in the attack. Local medics said their injuries were not serious.

A spokesman for the interior ministry said the explosion happened inside the compound at about 4am GMT.

“This is reported as the first suicide bombing in the country,” he said.

“The minivan exploded before getting anywhere near the main part of the embassy. There is a lot of concern about the attack. The deputy prime minister visited the scene but hasn’t pointed his fingers in any direction as to who carried out the attack.”

Local residents told AFP news agency the blast had blown in their windows and caused their houses to shake.

Employees from the Chinese and nearby American embassy were evacuated, the Kyrgyz emergency service said.

China’s foreign ministry condemned the attack, calling it an “extreme and violent attack” and urging authorities to “get to the bottom of the incident”.

It added that China would “resolutely strike against all forms of terrorism” and protect the safety of its people and government organisations overseas. 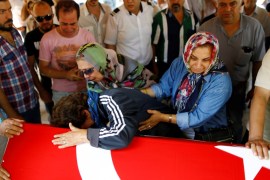