Tunisia’s new government has won a confidence vote, almost a month after the last government was dismissed.

Prime Minister-designate Youssef Chahed‘s unity government was backed by parliament late on Friday with 167 votes in favour, 22 against and five abstentions, according to the AFP news agency.

The vote of confidence will now see Chahed and his cabinet take office in the coming days and comes amid warnings by Chahed that an austerity programme will be inevitable if the country does not overcome its economic difficulties.

“If the situation continues like this, then in 2017 we will need a policy of austerity, and dismiss thousands of public sector employees and impose new taxes,” Chahed told parliament before the vote for his broad coalition, which includes secular, Islamist and leftist parties, independents and trade union allies.

Chahed, who at 40 is the youngest prime minister Tunisia has had since independence from France in 1956, vowed to press ahead with economic reforms sought by international lenders such as the International Monetary Fund and the World Bank.

He also said his new government would give priority to fighting corruption and “terrorism”, and would be tough on illegal strikes.

“We will not allow interruption of production at any factory, and we will be firm and severe in dealing with illegal strikes and sit-ins,” he said in his speech, according to Reuters news agency.

Critics of Chahed, who is an ally of President Beji Caid Essebsi, have questioned whether he has the political clout to overcome labour union opposition, strikes and party infighting that have dogged past governments.

Labour unions and other groups have resisted attempts to reform pensions and introduce more taxes while at 13.5 percent of gross domestic product, Tunisia’s public sector wage bill is proportionately one of the highest in the world.

Chahed was appointed prime minister-designate by President Essebsi early this month after parliamentarians passed a vote of no confidence in then-Prime Minister Habib Essid’s government following just 18 months in office.

Tunisia is considered a rare success story of the Arab Spring, though authorities have failed to resolve the issues of poverty, unemployment, regional disparities and corruption that preceded Ben Ali’s fall. 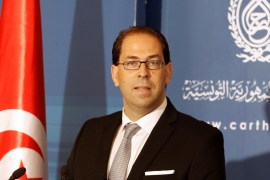 Youssef Chahed has appointed a new finance minister but kept the previous foreign and defence ministers in their posts. 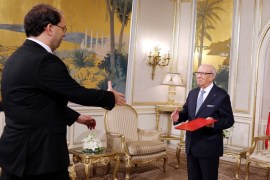 Youssef Chahed, the prime minister-designate, warns Tunisians to brace themselves for “exceptional sacrifices”. 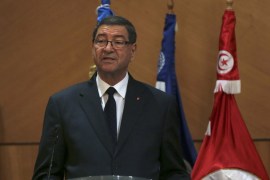 Members of Tunisia’s parliament vote Prime Minister Habib Essid out of office 18 months after his appointment.