The first buses carrying residents and rebel fighters left the Damascus suburb of Daraya on Friday under a deal that will see the area evacuated after a four-year siege by government forces.

Aid convoys arranged by the medical charity Red Crescent entered the suburb early on Friday, as part of the deal that grants control of the area to government forces.

Rebel fighters and government forces agreed to a deal on Thursday to evacuate the town, which pro-government forces have surrounded since 2012. Since then, only one aid shipment has reached the area, according to the United Nations.

Residents were suffering from severe shortages and malnutrition prior to the aid deliveries, according to local activists.

The Syrian opposition criticised the evacuation, saying that the international community had failed the people of Daraya.

“Daraya did not fail today,” George Sabra of the opposition peace talks team told DPA news agency. “It was the international community who failed, and failed the people of Daraya.”

Sources told Al Jazeera that about 8,000 civilians and 800 rebels would be evacuated from the Damascus suburb, which, before the war, was home to a quarter of a million people.

Al Jazeera’s Hashem Ahelbarra, reporting from Gaziantep on the Turkish side of the Syria-Turkey border, said the rebels were “forced to sign the deal”.

“For nearly four years, residents of Daraya have lived under siege, with civilians being starved to death by government forces. This is a deal that the rebels had to sign, and we will now see civilians moved to Sahnaya – a town in the Damascus governorate – under regime control,” he said.

UN ‘not consulted’ on deal

The UN, which has repeatedly called for the lifting of the siege, said it was “not involved and not consulted in this deal”, in a statement put out by the UN Special Envoy to Syria Staffan de Mistura’s office.

De Mistura, who met with the US Secretary of State John Kerry and Russian Foreign Minister Sergey Lavrov in Geneva on Friday, said the situation in Daraya was “extremely grave and tragic” and that “the repeated appeals to lift the siege of Daraya have not been headed”.

Reporting from Geneva, Al Jazeera’s diplomatic editor James Bays said the Syrian government’s “starvation of surrender policy has actually worked because they have now managed to close down Daraya and remove everyone from Daraya”.

Rebel forces from Daraya will be taken to the northern province of Idlib, held by the Army of Conquest, a coalition of armed anti-government groups.

The rebels who controlled Daraya belonged to two rebel groups: Ajnad al-Sham and the Martyrs of Islam, groups allied with the Army of Conquest.

However, activists told Al Jazeera that they were extremely concerned over the safety of civilians, many of whom are relatives of the rebels, as the government offered little to no guarantee.

Speaking to Al Jazeera from Jordan, advocacy adviser Charmain Mohamed of the Norwegian Refugee Council said although the end of hostiles in the town was a positive step, her team was “concerned about the protection of civilians” and that any evacuations “should be voluntary in nature”.

Some opposition groups also criticised the deal, calling it a major setback as Sunnis would be forced from their homes, further fracturing the country along sectarian lines.

“This is a pattern by the government to push Sunnis out of communities they control and have been living in for decades. In 2015, there was a similar deal in Zabadani on the outskirts of the capital,” our correspondent added.

In 2012, several hundred people were killed in Daraya, including civilians, many execution-style, when security forces stormed the suburb after locals took up arms.

According to the UN, nearly 600,000 live under siege across Syria, most surrounded by government forces.

In several places, lengthy government sieges have prompted rebels to agree to evacuation deals with the regime, leading activists to accuse Damascus of using “starve or surrender” tactics.

Earlier this year, de Mistura estimated that 400,000 people had died throughout the last five years.

The UN no longer keeps track of the death toll due to the inaccessibility of many areas and the complications of navigating conflicting statistics put forward by the Syrian government and armed opposition groups. 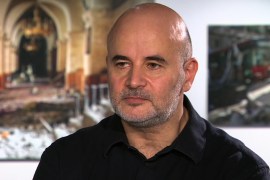 Syria war: ‘Anyone who shows the truth is an enemy’

Photographer Ammar Abd Rabbo talks about documenting the Syrian war and everyday life in the war-torn city of Aleppo.