Turkey sent more tanks into northern Syria on Thursday and demanded Kurdish fighters retreat within a week as it seeks to drive out the Islamic State of Iraq and the Levant (ISIL) from the border region in its first major incursion into the war-torn county.

Free Syrian Army (FSA) fighters, along with Turkish special forces and tanks, and supported by Turkish and US air power, took over the ISIL-controlled town of Jarablus on Wednesday, pushing the group back to its last stronghold in northeastern Syria – al-Bab.

Syrian rebel and Turkish forces pressed on past Jarablus on Thursday in attempt to clear the border area of any ISIL presence.

“The Free Syrian Army now is in total control of Jarablus and the area surrounding it, and they say that they are now going to try to move forward to recapture the territory that is now under ISIL control … particularly in al-Bab,” said Al Jazeera’s Hashem Ahelbarra, reporting from Karkamis, just across the border from Jarablus.

But Turkish President Tayyip Erdogan and senior government officials have made it clear that the aim of “Operation Euphrates Shield” is as much about stopping the Kurdish YPG from seizing more territory along the border and filling the void left by ISIL, also known as ISIS, as it is about eliminating the hardline group itself.

Turkey demanded that the YPG retreat to the east side of the Euphrates within a week. The Kurdish fighters had moved west of the river earlier this month as part of a US-backed operation, now completed, to capture the city of Manbij from ISIL.

But just hours after the YPG said it had withdrawn east of the Euphrates, Turkish state media reported that Turkish artillery had shelled YPG fighters south of Jarablus, claiming they had advanced westward.

Ankara views the YPG as a threat because of its close links to the Kurdistan Worker’s Party (PKK), which has been fighting Turkish forces for the past three decades.

It has been alarmed by the YPG’s gains in northern Syria since the start of the Syrian civil war in 2011, fearing it could extend Kurdish control along Turkish borders and fuel the ambitions of its own Kurdish rebels.

Turkey’s stance has put it at odds with Washington, which sees the YPG as its strongest ground force in the war against ISIL. It is one of the most powerful rebel groups in Syria and regarded as the backbone of the Syrian Democratic Forces (SDF), a US-backed alliance formed last October to fight ISIL.

Turkish Defence Minister Fikri Isik said preventing the Kurdish PYD party – the political arm of the YPG – from uniting Kurdish cantons east of Jarablus with those further west was a priority.

“Islamic State should be completely cleansed, this is an absolute must. But it’s not enough for us … The PYD and the YPG militia should not replace Islamic State there,” Isik told Turkish broadcaster NTV.

“The PYD’s biggest dream is to unify the western and eastern cantons. We cannot let this happen,” he said.

US Secretary of State John Kerry told Turkish Foreign Minister Mevlut Cavusoglu by phone on Thursday that YPG fighters were retreating to the east side of the Euphrates, as Turkey has demanded, foreign ministry sources in Ankara said.

A spokesman for the US-led coalition against ISIL also said that the SDF had withdrawn across the Euphrates, but had done so “to prepare for the eventual liberation” of Raqqa, ISIL’s stronghold in northern Syria.

Isik said the retreat was not yet complete and that Washington had given assurances that this would happen in the next week.

“We are closely following this … If the PYD does not retreat to east of the Euphrates, we have the right to do everything about it,” he said.

Speaking during a visit on Wednesday to Turkey, US Vice President Joe Biden also tried to soothe Turkish concerns about Kurdish territorial gains in Syria.

He said there should be no separate Kurdish entity in northern Syria and the country should remain united.

Kurdish fighters would not receive US support if they failed to pull back east of the Euphrates as promised, he said.

The Turkish-backed offensive comes four days after a suicide bomber suspected of links to ISIL killed 54 people at a Kurdish wedding in the southeastern city of Gaziantep.

A senior Turkish official said there were now more than 20 Turkish tanks inside Syria and that additional tanks and construction machinery would be sent in as required. A Reuters news agency witness saw at least nine tanks enter on Thursday, and 10 more were waiting outside a military outpost on the Turkish side.

“We need construction machinery to open up roads … and we may need more in the days ahead. We also have armoured personnel carriers that could be used on the Syrian side. We may put them into service as needed,” the official said.

Erdogan said on Wednesday that ISIL had been driven out of Jarablus and that it was now controlled by Turkish-backed Syrian rebels.

“The myth that the YPG is the only effective force fighting Islamic State has collapsed,” Erdogan’s spokesman Ibrahim Kalin wrote on Twitter, reflecting Turkish frustration at how closely Washington has been working with the Kurdish fighters.

Saleh Muslim, head of the Kurdish PYD, said on Wednesday that Turkey was entering a “quagmire” in Syria and faced defeat there like Islamic State. Redur Xelil, spokesman for the YPG, said the intervention was a “blatant aggression in Syrian internal affairs”.

After seizing Jarablus, the Turkish-backed rebels have advanced up to 10 km south of the border town, rebel sources and a group monitoring the war said. 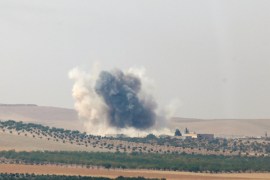 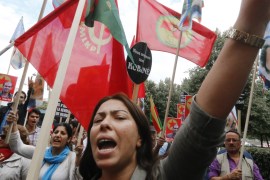 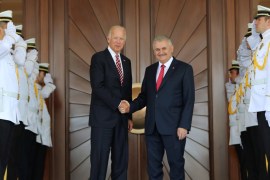