US Vice President Joe Biden said on Wednesday that he understood the “intense feeling” in Turkey over the US-based preacher Fethullah Gulen whom Ankara accuses of masterminding the July 15 failed coup.

Speaking at a news conference with Turkish Prime Minister Binali Yildirim, Biden said work was continuing by US legal experts to evaluate the evidence produced by Turkey “that need to be supplied to an American court” for an extradition.

“I understand the intense feeling your government and the people of Turkey have about him [Gulen]. We are cooperating with the Turkish authorities,” he said.

At the press conference in Ankara, Biden said that the US has “no, no, no, no interest whatsoever in protecting anyone who has done harm to an ally. None. But we need to meet the legal standard requirement under our law.”

He said it would be an impeachable offence for US President Barack Obama to order the extradition of a foreign national.

“We have no reason other than to cooperate with you [Turkey] … It always takes time … It is never understood why the wheels of justice move deliberately and slowly. It is totally understandable why the people of Turkey are angry,” he said.

READ MORE: US delegation in Turkey to discuss evidence on Gulen

Turkish officials have warned that if Pennsylvania-based Gulen is not extradited, relations will suffer further and anti-American sentiment will deepen in the country.

“This is clearly an issue that needs to be carefully managed,” Ambassador Adam Ereli, a former US diplomat, told Al Jazeera. “Emotions are raw, sensitivities are high, and frankly the issue is a very complex one.”

“Working through the [extradition] process will take time.”

Even though Biden failed to offer a rapid solution to the Gulen problem, Ereli said, his visit established a “mechanism for dealing with this issue at a senior level.”

“Now, responsible officials from both governments are going to be in constant communication and are going to know that they will be getting answers from people with authority.

“Hopefully this will lower the temperature.”

A senior US official said on Wednesday that Turkey had submitted four extradition requests for Gulen but offered no evidence tying him to last month’s failed coup.

Yildirim said that if the process of extraditing Gulen is expedited, Turkish people’s disappointment would be dispelled “very quickly”. 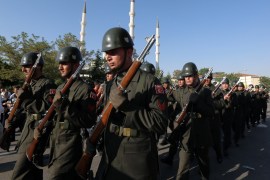