Yatta, occupied West Bank – A mobile clinic with specialised doctors, nurses, nutritionists and podiatrists recently made a stop in Yatta, the main market town of the South Hebron Hills in the occupied West Bank.

The clinic – a large truck stocked with free treatment options – is at the forefront of the battle against diabetes, which has now become the leading indirect cause of death in Palestine as the main risk factor for developing cardiovascular disease, according to the World Health Organization.

“The mobile clinic is our only alternative for diabetes treatment. We live a life of poverty,” Abu Abdullah, a man in his late fifties, told Al Jazeera.

One among tens of Palestinian patients waiting outside the clinic on a recent day, Abu Abdullah said he moved to the outskirts of Yatta three decades ago, after the Israeli army forced him off his land in the South Hebron Hills. Since the move, it has been hard for him to earn enough money to provide for his wife and seven children.

His story is far from unique, as Israel controls nearly all aspects of Palestinian economic life. Palestinian arable land occupied by Israel for military and settler use amounts to two-thirds of the West Bank, leaving Palestinian unemployment rates among the highest in the world.

“Poverty and unemployment is directly linked to inactivity and a poor diet. That is a recipe for diabetes,” said Ahmad Abu al-Halaweh, who manages the mobile clinic and serves as director of the Diabetes Care Center at the Augusta Victoria Hospital in occupied East Jerusalem.

An estimated 15 percent of Palestinians have been officially recorded as suffering from diabetes, compared with a global average of nine percent. But Abu al-Halaweh believes the real number in Palestine is higher – more than 20 percent.

“In the surrounding areas of Yatta, we believe half of the adult population has Type 2 diabetes. But many of them don’t know they have it,” he told Al Jazeera, blaming the region’s high unemployment rates and lack of education for the increased rates.

The Israeli occupation has exacerbated the diabetes crisis in a number of ways, “especially the psychological stress that comes from it”, Abu al-Halaweh added.

“People in Gaza or Palestinian refugees suffer from an even poorer diet,” he said, noting that one-third of Palestinians are considered to be short of food. “They may not have nutritional deficits in terms of calories, but the food aid they receive can be pallets of canned tuna eaten for weeks. Such an unvaried diet is not optimal.”

The mobile clinic roaming the streets of the occupied West Bank is the only such service in Palestine for screening and treating diabetes patients. It also functions as a tool for educating Palestinians about the dangers of diabetes.

Since launching three years ago, the Diabetes Care Center estimates that its mobile clinic has reached more than 600,000 Palestinians in the West Bank.

“The mobile clinic was an initiative to work around how it is illegal for Palestinians to visit Jerusalem, where the Diabetes Care Center is located. It is the only hospital in Palestine specialising in diabetes treatment, but that is of no [use] if patients are not allowed to visit us,” Abu al-Halaweh said.

“If a patient is permitted to come to the hospital, another problem is the cost of travelling,” he added. “Many are poor and cannot afford to lose days of work. Add that to the time it takes to cross all the Israeli checkpoints and ID controls throughout the West Bank, and the patient might not show up at all, despite having the permission.“

“Life-saving insulin is available for most Palestinians through the Palestinian Ministry of Health and UNRWA, but many people in rural areas don’t even know what diabetes is – and we suspect only a quarter of our patients actually take their medicine, so you can see the importance of education,” he noted.

“Diabetes requires life-long treatment, but it is also a major burden for the healthcare system. Almost half of UNRWA’s medicine costs are for diabetes,” he added.

Early work towards diabetes prevention is critical in this context, Abu al-Halaweh said: “Especially in urban areas, we need facilities for more physical activity, such as football fields and playgrounds – anything that can create a culture of exercise and movement, and to stop the current [trend].”

It seems impossible to overcome all the difficulties as long as the international community accepts the Israeli occupation.

Henrik Bronnum-Hansen, associate professor with the University of Copenhagen’s department for public health

There is no quick fix for the societal problem of diabetes, which requires a well-functioning healthcare system geared towards chronic care. Henrik Bronnum-Hansen – an associate professor with the University of Copenhagen’s department for public health, who has been studying chronic illness in the occupied Palestinian territories for nearly a decade – noted that movement restrictions, such as checkpoints and the separation wall, have impeded the development of such a system in Palestine.

“The challenges of managing the threat of the increasing occurrence of diabetes require state-building of a free Palestinian society that makes life worth living without major psychological stressors, with strongly reduced poverty, healthy foodstuffs, much better possibilities for physical activity and the establishment of a coherent and efficient public healthcare system,” he said.

“It seems impossible to overcome all the difficulties as long as the international community accepts the Israeli occupation.” 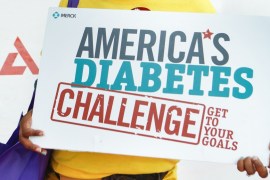 Eating habits and physical inactivity cited as number of people with diabetes grows by four times since 1980. 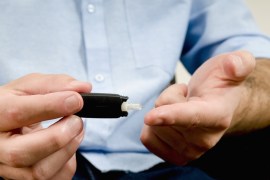 A new method of medical consultation has been developed for the new generations who often juggle with a busy life.