Aleppo, Syria – Last week, rebel groups announced that they had broken the siege of eastern Aleppo imposed by the government of President Bashar al-Assad.

Many residents in this rebel-controlled part of the city rejoiced at the news, as the nearly one-month-long siege created drastic price increases and shortages of food and fuel, while leaving hundreds of wounded people trapped.

But since then, the situation on the ground has not immediately improved, residents say. Fighting in the area remains so intense that no significant amount of aid has been able to reach the area, according to locals and aid workers.

“So far, nothing has really changed,” said Salem Sabbagh, a grocer in eastern Aleppo, noting that the limited amount of food that has since entered the city is not enough to feed its more than 300,000 residents.

“If we had received a lot of food, you’d be able to buy food at not-so-expensive prices, like before the siege, [but prices remain high],” he told Al Jazeera.

Mustapha al-Hussein – a grocer in the Maadi district, which was hit by several air strikes this year – agreed that little has improved since rebels broke the government siege.

“Some eggs, tomatoes and [cooking] materials like flour and sugar came in, but prices are high, unlike before the siege,” Hussein told Al Jazeera, noting he is not optimistic that things will immediately get better. “It will take time for food to reach the markets and return to their natural prices.”

On August 7, the Syrian Revolution Network tweeted pictures of food deliveries to Aleppo after the siege was broken, saying the goods came from Syrians in Idlib, another rebel-controlled area. But as Sabbagh and Hussein attested, such deliveries have been small in quantity.

Moreover, aid organisations say they have not been able to deliver supplies due to heavy fighting in and around Aleppo.

“The fighting is still very intense. It’s really impossible to secure safe passage for a convoy,” said Evita Mouawad, a humanitarian adviser for the Middle East region with Doctors Without Borders (MSF).

This has MSF concerned, as eastern Aleppo is overdue for a shipment of medical supplies.

“We’re very worried at the moment. Supplies were supposed to reach them a couple of weeks ago,” Mouawad told Al Jazeera.

“It continues to be impossible to bring aid into east Aleppo. The volume of assistance that’s needed is growing [now that both sides of the city are de facto besieged],” Mercy Corps spokesperson Christy Delafield told Al Jazeera. “We urgently need a sustained ceasefire and guarantees of unfettered access by all parties to the conflict.”

Although it is not facing as dire conditions as the east, western Aleppo is also under siege, after rebel groups cut the government supply line in Ramosa earlier this month.

The United Nations has called for a 48-hour ceasefire to allow the delivery of humanitarian aid to Aleppo. Although Russia announced a daily three-hour halt to air strikes on August 11, the UN said it was not long enough.

If a 48-hour ceasefire could be achieved, Mouawad believes that supplies could finally be delivered.

“Our supplies are ready,” she said. “We need to make sure both parties to the conflict respect the passage of the convoy.” 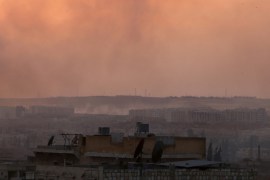 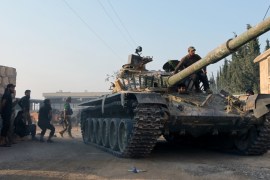