The Muslim world has united to condemn a deadly attack at one of Islam’s holiest sites – the Prophet’s Mosque in the Saudi city of Medina.

Setting aside differences, world leaders, politicians, groups and activists expressed their outrage on Tuesday, a day after a suicide bomber killed at least four guards within striking distance of the Prophet Muhammad’s tomb.

The blast followed two more attacks, in Jeddah and Qatif, also on Monday.

A spokesman for Saudi Arabia’s interior ministry described the triple bombings as “despicable acts that did not respect the sanctity of place, time and innocent people”.

Here are some of the reactions from around the world following the suicide attacks.

There are no more red lines left for terrorists to cross. Sunnis, Shiites will both remain victims unless we stand united as one. #Medina

Joko Widodo, the president of Indonesia, said “terror cannot be justified” and urged the public to remain calm but alert.

Najib Razak, the Malaysian prime minister, also denounced the attack near the mosque where Prophet Muhammad is buried.

We condemn such vile acts happened especially within the Prophet's Mosque's vicinity in the holy city of Medina & this is not Islam.

“We stand shoulder-to-shoulder with our Saudi brothers in fighting the menace of terrorism,” General Raheel said.

Strongly condemn the terrorist attacks in Saudi Arabia. Wish God’s mercy upon those who lost their lives.

Cairo-based Al-Azhar, the highest authority in Sunni Islam, condemned the attacks and stressed “the sanctity of the houses of God, especially the Prophet’s Mosque”.

Saudi Arabia’s supreme council of clerics said the blasts “prove that those renegades … have violated everything that is sacred”.

Lebanon-based Shia group Hezbollah also denounced the Medina attack as “a new sign of the terrorists’ contempt for all that Muslims consider sacred”.

The governments of Jordan and Lebanon joined in the condemnation, while Iraq said the attacks amounted to “heinous crimes”.

Indian singer Adnan Sami expressed his sadness over the attack in one of the Muslim world’s most important sites.

Terrorism has no religion. A Muslim wud not bomb one of Islam's holiest places. This act proves it beyond reasonable doubt! Period! #Medina

Author Aisha Saeed said the attack was “the face of evil”.

Muath Al Wari, an analyst at the Center for American Progress, reflected on the importance of Medina for Muslims.

Hayder al-Khoei, a research director at the Centre for Academic Shia Studies, described the attack in Medina as an act of “cowards”.

Nothing is sacred for these cowards. If they could slaughter Muslims in Mecca in the Grand Mosque itself, they would pic.twitter.com/yL8xYsEQHM

Rim-Sarah Alouane, a French researcher in public law, raised the fact that Muslims themselves are often victims of deadly attacks, and should not be made to apologise en masse for the actions of a few.

Do Muslims have to apologize and condemn the attacks of #Qatif and #Madinah, one of the holiest Muslim city ? Just asking for a friend.

Tariq Ramadan, author and professor of Islamic Studies at the university of Oxford, called for justice.

Syrian scholar Muhammad Al-Yaqoubi, like many others, pointed to a saying of the Prophet Muhammad about harming Medina.

Retired Pakistani cricketer Shoaib Akhtar  shared his sadness over the bombing with his 115,000 followers.

Drowned in my heart..
saddened and felt sick about the blast in my Madina PAK..

Medina is associated with peace & most visitors love the tranquil feelings they experience here. To attack it with hate speaks volumes 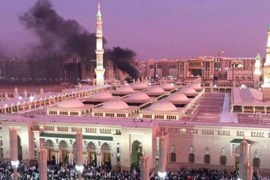 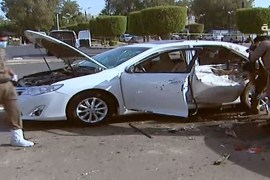 Bomber blows himself up near US consulate in Jeddah

Suicide attacker killed and two officers wounded in blast near the US consulate in Jeddah, Saudi interior ministry says.