Abu Mohammed al-Jolani appeared in camera for the first time to announce his group’s name has also changed to Jabhat Fath al Sham, or The Front for liberation of al Sham.

“We declare the complete cancellation of all operations under the name of Jabhat al-Nusra, and the formation of a new group operating under the name ‘Jabhat Fath al-Sham’, noting that this new organisation has no affiliation to any external entity,” Jolani said.

The release of the video on Thursday followed earlier reports that the leader of al-Qaeda had approved the split, so the Nusra forces could concentrate on their fight against the Syrian government and other rebel groups.

‘We look at it with relief’

Al-Nusra first surfaced on the internet in early 2012 to claim responsibility for suicide bombings in Aleppo and Damascus.

The well-armed group, with highly trained fighters, has since staged numerous attacks on security forces – as well as on other armed groups in the country.

It is sanctioned by the UN Security Council and listed as a “terrorist” group by the US and Russia.

In February, the US and Russia excluded the group, as well as the Islamic State of Iraq and the Levant (ISIL, also known as ISIS) from a cessation of hostilities deal aimed at ending the fighting in Syria.

Reacting to Jolani’s declaration, Farah al-Atassi, a spokeswoman for the High Negotiations Committee, the Syrian opposition’s main negotiating bloc, said it was still “very premature” to predict the full consequences of the split from al-Qaeda.

Atassi added, however, that she was hopeful that the move would rid powers such as Russia of their reasoning for bombing Syria.

“We look at it with relief,” she told Al Jazeera from Washington DC, minutes after Jolani’s announcement.

“This will reflect somehow positively on the Free Syrian Army (FSA) who has been fighting ISIL and al-Nusra for the past six months, because Russia is bombing and hitting FSA positions and civilian neighbourhoods with the excuse that they are hitting al-Nusra.”

Al Jazeera’s Mohamed Jamjoom, reporting from Gaziantep on the Turkish side of the Syrian-Turkish border, said the initial reaction from members of the opposition within Syria was “decidedly mixed.

“All the opposition activists we’ve spoken with inside Syria told us they were not surprised by the announcement; there had been mounting speculation in the last few days that this was going to happen,” Jamjoom said.

“A few told us they believed that by al-Nusra separating itself formally from al-Qaeda and changing its name, as well as by speaking about unifying in the fight in Syria, that that meant that the US and others would no longer consider al-Nusra to be a terrorist organisation; that more international backers would be behind rebel groups.”

However, most of the activists in Aleppo did not “really believe what Jolani is saying; they don’t trust the motivations,” Jamjoom added.

“Some of them wondered whether this was some kind of publicity stunt to get more support from the international community, with many wondering whether this was going to have any practical impact.”

Later on Thursday, the White House said its assessment of al-Nusra had not changed, despite the announcement that that the group was cutting its ties with al-Qaeda.

“There continues to be increasing concern about Nusra Front’s growing capacity for external operations that could threaten both the United States and Europe,” White House spokesman Josh Earnest told reporters at a briefing.

“We certainly see no reasons to believe that their actions or their objectives are any different,” US State Department spokesman John Kirby said.

“They are still considered a foreign terrorist organisation,” Kirby said. “We judge a group by what they do, not by what they call themselves.”

Al Jazeera’s Rosiland Jordan, reporting from Washington DC, said the White House “considered Nusra a security threat” to the US and its interests.

“When the US made the decision to declare Nusra a terrorist organisation [in 2014], there was a lot of criticism, notably coming from members of the Syrian opposition who said Nusra had the best trained, most effective fighters in their efforts to topple the government of [Syrian President] Bashar al-Assad,” Jordan said.

“But the US government was not moved, saying that they considered its [Nusra’s] de facto ties to al-Qaeda to be a very serious problem.” 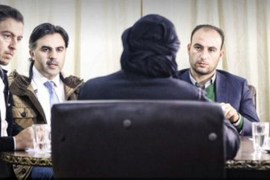 Speculation mounts on future of Syrian group’s ties with al-Qaeda before interview to be released on Friday.