The Syrian army says that pro-government forces have cut off all supply routes into the eastern, rebel-held part of Aleppo in the country’s north.

According to the UK-based Syrian Observatory for Human Rights, eastern Aleppo has been under effective siege since July 11, and advances in recent days by forces loyal to President Bashar al-Assad have strengthened their control of the only route in.

“Today there is no way at all to bring anything into Aleppo,” Observatory Director Rami Abdel Rahman said on Wednesday.

Taking full control of the city would be a significant victory for Assad.

An advance by pro-government forces around the only remaining supply route into the eastern sector this month enabled them to fire on it at close range, making the battlefront Castello road too deadly to use and putting at least 250,000 people in rebel-held districts under siege.

“We’re hearing from activists and witnesses that regime forces are taking more and more of that area,” said Al Jazeera’s Mohammed Jamjoom, reporting from Gaziantep on the Turkish side of the Syria-Turkey border.

“That is posing a real precarious problem for rebel fighters because the city is being increasingly encircled by regime forces.”

State media also said humanitarian corridors have been created for residents who want to escape the besieged areas of the city.

“Opposition activists are saying they are facing more dire circumstances – that the siege is creating a humanitarian crisis in and around the city,” said Jamjoom.

On Tuesday, Syrian government helicopters targeted the al-Mashhad neighbourhood in the rebel-held half of Aleppo, killing at least 18 people, according to the Observatory.

On Monday, more than 42 civilians were reported to have been killed and dozens more wounded in air strikes launched by the Syrian government in al-Atareb, a city in Aleppo province in the country’s northwest.

The latest attacks came as the United Nations said it hoped to restart stalled peace talks in August.

Previous attempts at a diplomatic solution to end Syria’s five-year-old civil war collapsed in April, partly owing to an increase in violence in Aleppo.

In separate events, the US army said on Wednesday it had enough evidence to start a formal investigation into allegations that US-led coalition air strikes killed civilians near Manbij, a city in the Aleppo governate.

After examining “internal and external information”, the coalition determined that there was sufficient credible evidence of civilian victims to open a formal inquiry, said spokesman Colonel Chris Garver.

According to witness reports, between 56 and 167 civilians died in attacks north of Manbij on July 19.

The US has been conducting military activity in Syria as part of an international coalition set up to battle the Islamic State of Iraq and the Levant (ISIL, also known as ISIS) armed group

While an investigation of this kind typically takes between three and six months, this particular case may extend beyond that, Jordan added.

“In Syria, the US does not have permission to be on the ground … They can’t go to the scene [of the attack],” said Jordan, explaining that the nature of the US intervention in the country made the probe more complicated than others.

“They will have to talk to non-governmental organisations and monitoring groups that are keeping track of these incidents, and see if these organisations will put them in contact with witnesses so they can try to get the information that way.”

The US-led coalition has been supporting mostly Kurdish opposition forces in and around Manbij since May, in the hope of breaking ISIL’s hold on the region.

The Syrian conflict began as a mostly unarmed uprising against Assad in March 2011, but it quickly escalated into a full-blown civil war between the government, armed opposition fighters and hardline groups such as the Islamic State. 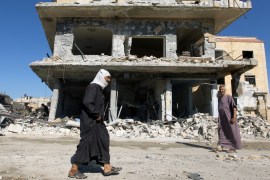 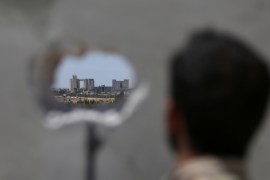