Afghanistan is observing a national day of mourning after a twin suicide bombing at a protest march in Kabul killed 80 people and wounded another 230.

Families collected bodies from hospitals and morgues on Sunday in preperation for funerals in the west of the capital.

Some families plan to buy their dead in Kabul, while others have chosen to hold funerals in their respective hometowns. Several families are still searching for missing relatives in hospitals and morgues.

Ali Bakhtiyari is set to bury five of his friends, who were killed in Saturday’s blasts.

“When the explosion happened, I remember seeing them very close to it. I thought they would be injured but not dead,” Bakhtiyari told Al Jazeera.

“Losing five friends all at the same time is not easy.”

In a televised address on Sunday morning, President Ashraf Ghani vowed to punish those responsible for the attack.

“I will take revenge against the culprits,” he said, declaring Sunday a day of national mourning.

Tadamichi Yamamoto, the United Nations official in Afghanistan, condemned the attack as a war crime.

The United States offered assistance to investigate the attack.

Afghanistan’s Interior Ministry has issued a ban on public gatherings of all types for the next 10 days.

Thousands of members of the Hazara minority took to the streets of Kabul on Saturday over a new power line, saying its route bypasses provinces where many of them live.

The attack targeting the protesters was quickly claimed by the Islamic State in Iraq and the Levant (ISIL, also known as ISIS), a hardline group with a history of targetting the Hazara people.

“Two fighters from Islamic State detonated explosive belts at a gathering of Shi’ites in… the city of Kabul in Afghanistan,” Amaq, an ISIL-linked website, said.

Officials in Afghanistan‘s main intelligence agency, the National Directorate for Security (NDS), said the attack was planned by an individual named Abu Ali, an ISIL fighters they said was based in Achin district in Nangarhar.

They said three bombers were involved in the attack.

Ambulances struggled to reach the scene, as authorities had overnight blocked key intersections with stacked shipping containers to control the movement of the protesters.

IN PICTURES: Devastating blasts rip through Hazara protest in Kabul

“I was in the crowd just a few meters away from the blast, it was so loud that I am still in a state of shock,” Mehdi Ali, a protester told Al Jazeera on Sunday.

“I saw dead bodies lying all over the area. Is this the value of human blood here?”

Another protester who is mourning the death of his friend killed in the blasts told Al Jazeera that they have ‘lost hope in the government’ and will ‘not be able to recover from the shock’.

“We were peaceful protesters asking for our rights, who did we harm? Why did I lose my friend? Did he deserve this?” Zafar, a protester, told Al Jazeera.

Al Jazeera’s Qais Azimy, reporting from Kabul, said it was one of the deadliest attacks in the capital in years.

“The city of Kabul is totally in a shock right now,” he said.

“In the past ISIL has carried out attacks in the eastern part of the country, mainly suicide attacks, but not as far as Kabul – they were limited to Nangarhar province along the border with Pakistan,” Azimy added.

“If it is true that ISIL is behind this attack it shows the growing capability of the group.”

The Taliban denied any involvement and said in a statement sent to Al Jazeera that the attack was “a plot to ignite civil war”.

READ MORE: Who are the Hazara?

The Persian-speaking Hazara, estimated to make up about 9 percent of the population, are Afghanistan‘s third-largest minority, but they have long suffered discrimination and thousands were killed during the period of Taliban rule.

The 500-kilovolt TUTAP power line, which would connect the Central Asian nations of Turkmenistan, Uzbekistan and Tajikistan with electricity-hungry Afghanistan and Pakistan, was originally set to pass through the central province.

But the government re-routed it through the mountainous Salang pass north of Kabul, saying the shorter route would speed up the project and save millions of dollars.

Hazara leaders in the country lashed out at the president, calling the decision prejudiced against their group. 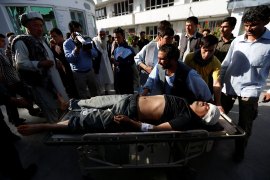 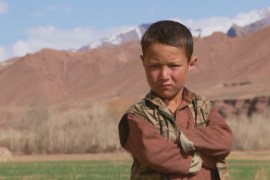