For the first time in UN history, candidates seeking to replace the organisation’s secretary-general have held a live debate, presenting the case for their candidacy and taking questions from UN member states on key global issues.

The debate on Tuesday, which was carried out by the Al Jazeera Media Network, offered a rare peek into the personalities who have entered the selection process.

All previous secretary-generals were chosen behind closed doors by the UN’s permanent five members: the US, China, Russia, France and Britain.

UN debate: A conversation with candidates hoping to be the next secretary-general

And while the permanent five will still choose the winning candidate, the debate allowed UN member states to see who is running for the post, and hear why the candidates believe they are the best person for the job.

Al Jazeera’s James Bays and Folly Bah Thibault hosted the debate, which was split into two panels of five candidates.

“A central issue quick to emerge was the need for greater unity within the organisation,” Al Jazeera’s Mike Hanna, reporting from the UN headquarters in New York, said.

Discussions were wide-ranging, and questions from UN ambassadors on the floor and by the moderators did not shy away from controversial issues, including allegations of sexual abuse by UN peacekeepers, Hanna said.

It was “an occasion on which the UN took a hard look at itself,” he said.

Responding to the issue of alleged sexual abuse by peacekeepers, candidate Christiana Figueres, a Costa Rican career diplomat who served as UN climate chief from 2010-16, said the immunity enjoyed by UN staff “cannot be impunity”.

“All those who have been proven, or would be proven, after a very serious and robust investigation, to be guilty of sexual abuse, must be held to account,” she said.

Opening the debate, candidates were given 90 seconds to present their case for being chosen as the person to replace current Secretary-General Ban Ki-moon.

Vesna Pusic, a former deputy prime minister of Croatia, said her whole life had been concerned with issues related to peace, development and human rights, whether locally or internationally.

Pusic said she was concerned by the wave of cynicism in current national and international politics.

“A lot of playing to the gallery without being prepared to look at the issues. And I actually want to counter the cynicism,” she said.

Pusic said later in the debate that being a feminist candidate was important, and noted that the UN had been dominated for 50 years by men.

With half of the 12 candidates women, issues related to gender equality were particularly salient, Al Jazeera’s Hanna said.

Candidate Natalia Gherman, deputy prime minister of Moldova from 2013-16, said the “best proof” of showing the UN’s commitment to gender equality “would be the selection of a woman as the next secretary-general of the United Nations”.

Vuk Jeremic, Serbian foreign minister 2007-12 and president of the UN General Assembly from 2012-13, began his pitch for the job stating, bluntly, “Not all is well at the United Nations, I’m afraid.

“There is a growing perception that the historic achievements made by this organisation are becoming more and more overshadowed by the sense of stagnation and failure. Now we’ve got to do something about it, and do it fast. I believe this is not a time for high rhetoric. I believe this is time for decisive action,” he said.

Susana Malcorra, Argentinian foreign minister and chief of staff to Ban Ki-moon from 2008-12, also spoke of the need for UN reform.

“The world demands today a United Nations that is closer to the people – much closer. That puts people and planet up front, and that is driven by the reality of issues and the need to deliver results,” she said.

“I am not surprised at the answers [candidates gave during the session] but really amazed that this event is taking place at all,” Ian Martin, head of the Security Council Report, which seeks transparency and effectiveness of the UN Security Council, told Al Jazeera.

“It really is historic and it’s part of a larger history opening up of the process for selecting the UN Secretary-General, which for 70 years has been something that has gone on exclusively behind closed doors in the Security Council.

“Now we’re seeing candidates subjected to questioning – I think this is extremely good for the UN,” Martin said.

Former Prime Minister of Portugal Antonio Guterres, who also served as UN high commissioner for refugees from 2005-15, said he was a candidate because, as secretary-general, he could better help to “reduce human suffering and offer better opportunities for people”.

“We badly need two things at this moment: leadership and values,” Guterres said, adding that the next secretary-general must be “a solid ethical reference, and must be the symbol of those truly universal values that are enshrined in the UN charter”.

There is a need to “confront and defeat political populism, xenophobia, racism and violent extremism. And I believe those values are the values I’ve served in all my life,” he said.

Opening her presentation, former New Zealand Prime Minister and current head of the UN Development Programme Helen Clark responded to a moderator’s comment saying the secretary-general’s role was “not a poisoned chalice”. She added later that she had the “vision, experience and skills” to lead the UN.

Addressing an appearance that the UN is falling short in the area of peace and security, Clark said “we have to get better at preventing conflict and resolving conflict”, which would be achieved by building more inclusive societies that talked their difference out instead of fighting them out.

“In the short-term, we have got to get a lot better at anticipating warning signs of what could spill over into serious human rights abuses and conflict,” she said.

Danilo Turk, former president of Slovenia 2007-12, said the “world today needs a renovated United Nations”, and he had the experience to take on that responsibility.

Igor Luksic, prime minister of Montenegro between 2010-12, said he came from a country within a region that jonly 20 years ago was engulfed in wars and massacres – but was now at peace.

That transitional experience, said Luksic, is a model others can learn from. As well as working towards gender parity, the UN needs to work for the young, who are the generation to come “and we have to prepare well for them”, he said.

Irina Bokova, director of UNESCO and former acting Bulgarian foreign minister, said she was a deep believer in multilateralism, noting that she came from a multicultural country that was a bridge between the East and the West.

Responding to a question on the Israel-Palestinian conflict, Bokova said it should be a priority for the new secretary-general to rebuild trust between both sides and get peace negotiation re-started. 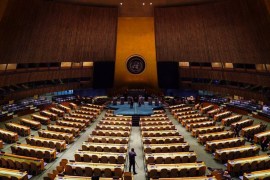 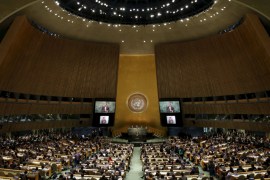 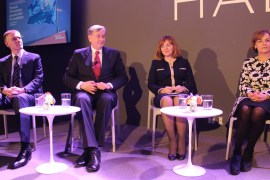 Men and women hoping to succeed Ban Ki-moon explain how they will represent interests of planet’s seven billion people.