A vicious and ruinous civil war broke out in South Sudan in late 2013 and has since left tens of thousands dead, hundreds of thousands displaced and an economy in tatters.

Almost three years later, the situation remains fragile while a deal with international donors is yet to be implemented.

The much-publicised return to the capital of Riek Machar, former rebel and South Sudan’s first vice president, should symbolise a positive, working relationship with his rival, President Salva Kiir.

The key question is: Can they work together?

Al Jazeera’s Peter Dobbie interviewed both of them in the capital, Juba.

Al Jazeera: How would you describe the relationship between you and Mr Machar?

President Salva Kiir: We are friends and we have been friends for many years, until when this incident happened in 2013. But after putting everything right, Mr Machar joined me and we are now working together again. We are friendly, to say so.

Al Jazeera: Your critics would say that you are not displaying enough unity at the moment. How do you get more unified, so you can begin to solve the problems facing your country?

Al Jazeera: You have some 850,677 refugees and asylum seekers as a direct result of what happened in this country. In real terms, in practical terms, what are you doing to solve these issues? There’s no money in the system.

President Salva Kiir: Right. You brought that question of money. Because whenever there are displaced people, or there are refugees, the solution is always money so that you can settle them. And then you get them food, medicine, everything so that they live comfortably, whether they are foreigners or citizens. So our problem is money. We have no money.

President Salva Kiir: The international community have been shifting their goalposts from the beginning. They said, they cannot help the government unless you sign the agreement. We signed the agreement in August last year. They said, again that we will not assist your government until you form the transitional government of national unity. And that has been our problem.

Dr Riik Machar refused to come to South Sudan. He stayed outside. He might have been assuming that if he didn’t come, there would be no support to the government from the international community, and the government would fall. Because the saying was that there is no money.

Al Jazeera: It seems that what you want to do is achieve peace, but not put people on trial. Surely that has to happen if you are to put a lid on the bubbling tension that exists here.

President Salva Kiir: Well, there is nobody that will really say that you don’t want to try people. If these are people who have committed crimes, they must be tried. We are fighting for justice. We fought with the Sudan government for 21 years, because there was no justice.

So if we come to become independent, and we don’t apply justice unto our people, then what was the reason for us fighting?

President Salva Kiir: When you preach messages of hate, probably you are going to divide the people.

The problem, that we are not moving smoothly on the implementation of the agreement, is the issues in the way the agreement was designed.

And when I signed this agreement in August last year, I said this in front of the president of Uganda. I told him that this agreement was not made to be implemented.

Al Jazeera: So you signed up to an agreement that you believe was essentially wrong?

President Salva Kiir: It was wrong. It was wrong because even the – to sign it was the problem. They said that if there is a wrong sentence in English, don’t correct it. Don’t put a comma or a full stop.

Al Jazeera: Do you absorb, or take on board any of the blame for what happened in this country?

President Salva Kiir: Well, I did … many times that I stood up in front of my people, in front of all the cameras, to tell the people of South Sudan that I’m sorry. Had we not behaved the way we were behaving, as the leadership of this country, we could not have thrown our people into this meaningless war.

Outside of Juba, in a heavily fortified compound which is home to the First Vice President Riek Machar, Al Jazeera’s Peter Dobbie asks about Machar’s role in the reconciliation process.

Al Jazeera: April 26 this year, what made you come back home?

First Vice President Riek Machar: Well, he hasn’t told me that. Because we have been discussing the implementation of it. So I expect that he will respect this bargain in the agreement.

Peter Dobbie: What does that mean, you expect him to respect what’s written into the agreement?

First Vice President Riek Machar: Implement it by spirit and the letter of the agreement.

The agreement is a roadmap, first for reform, and for establishing the new system of governance in the country, which will lead us to a democratic elections. This is the aspiration of the people of Sudan. After independence, they want a democratic election to take place.

Al Jazeera: Does this involve truth and reconciliation? And if it is, how do you achieve it?

First Vice President Riek Machar: Chapter seven will be implemented by establishing three insitutions. One: Truth, reconciliation, and healing commission. Which is very important to the people, and to everybody.
The other is compensation and reparation for the losses that happened during the war. Third is justice and accountability, by establishing a hybrid court, which will include South Sudanese and the rest. Peace without justice and accountability is not possible in this country. We cannot condone impunity.

Al Jazeera: When you have a meeting with Salva Kiir, how much real power do you feel you have at your disposal?

There are issues where we would need consensus. And if we don’t have consensus, we take it to the council of ministers. And if we fail, we resort to those who mediated the agreement.

Al Jazeera: Is that the best system for the country?

Al Jazeera: How could that be improved?

First Vice President Riek Machar: Well, since I came to Juba, I have been delivering one message with four issues.

One, stabilising security in the country. This is important. Two, stabilising the economy. Three, ensuring that the IDPs, the displaced are resettled. Four, that we initiate the process of national reconciliation and healing.This is not a message of hate at all.

Al Jazeera: And between now and the elections in 2018, what are you doing as a man, who got a very real power base to make sure that the temperature of this debate is reduced? Because there are still killings going on.

First Vice President Riek Machar: Well, that’s why I am saying in my messages, the first one is stabilising the security. What I mean is, lift the state of emergency. The second is to agree on containment of forces from both sides, so that nobody goes about carrying a gun, and within the process also ensuring that Juba and other cities in South Sudan, the security is taken over by the joint integrated police.

Al Jazeera: You’ve come up with good intentions. But there is a perception that there is almost total lack of delivery. You are not a failed state. But you are not far off.

First Vice President Riek Machar: Well, you know, if both of us and the rest of our partners in the transitional government of national unity work towards these objectives, of stabilising the security, we will definitely stabilise the economy by ensuring that our people increase their production. If they can be food-sufficient, the hard currency we are using in buying food will be used for other purposes.

Al Jazeera: Do you feel guilty about the war?

First Vice President Riek Machar: Anybody who is for the war, in retrospect, you will find that you regret a lot. The loss of souls. The loss of property, the destruction that has happened. The displacement is colossal. The regrets are there. But what would you do? You have to push forward. See that the country goes forward.

Al Jazeera: Who is the face of South Sudan that should go forward after the election, you or Salva Kiir?

First Vice President Riek Machar: It will be decided by the people.

These interviews have been edited for brevity and clarity. 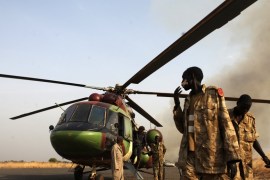 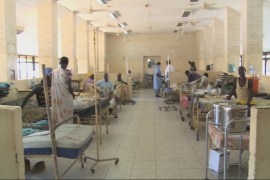 South Sudan: After war, fears of a health emergency

Aid agencies warn of an impending medical crisis in the world’s youngest nation as donor countries cut back on aid cash. 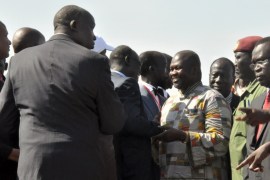