Turkish President Recep Tayyip Erdogan has vowed that his country “will never be divided” a day after suicide blasts killed at least 41 people and wounded nearly 239 others at Istanbul’s main international airport.

“There is an attempt to turn our security forces into guilty parties, but they will not succeed in their efforts because this nation knows full well who is who,” Erdogan said on Wednesday. “We will never forget our martyrs.”

Turkish officials have said there are indications three suicide bombers from the Islamic State of Iraq and the Levant (ISIL, also known as ISIS) carried out the deadly attacks at the Ataturk Airport, although no group has claimed responsibility.

Turkish Prime Minister Binali Yildirim said efforts to identify the attackers, who arrived at the airport in taxis, were continuing.

The attackers opened fire at airport guards at the terminal entrance and a gunfight erupted before they blew themselves up one by one at around 10pm, authorities said.

Security camera footage circulated on social media appeared to capture two of the blasts. In one clip a huge ball of flame erupts at an entrance to the terminal building, scattering terrified passengers.

Most of the casualties were Turkish citizens, a senior government official said. 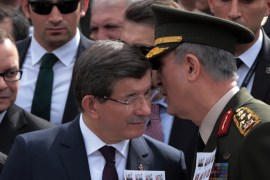 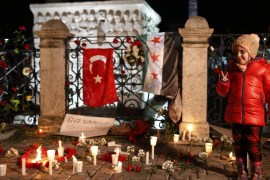