Ulaanbaatar, Mongolia – Campaigning for national elections on Wednesday has divided Mongolia as a record number of candidates vie for seats in parliament and local councils.

While suffering through the worst economic crisis since 2008, 12 different parties and three separate coalitions are jousting for power with the economy and foreign debt repayment topping the list of voter concerns.

The General Election Commission of Mongolia said 498 candidates are running for 76 seats in parliament, known as the State Great Khural. An additional 2,288 candidates are attempting to secure local council jobs.

Any party or coalition that wins a majority of parliamentary seats forms the government and appoints the prime minister.

In the capital and major cities, election banners and life-sized portraits of various candidates line the main streets, buildings, and houses.

With so many potential leaders to choose from, some here are overwhelmed.

“This year’s election is very confusing. There are way too many candidates and it is hard to decide to whom to vote for,” Bolormaa, an accountant who goes by one name like many Mongolians, told Al Jazeera.

For most the moribund economy is the main election issue. Mongolia’s economy consists mainly of mining for coal, copper, gold, and other ores. Non-commercial agriculture and livestock production also make up a small portion.

China is Mongolia’s largest trading partner and investor, absorbing about 80 percent of its exports. As the Chinese economy has slowed, demand for Mongolian coal dropped, halting growth.

WATCH: Mongolia: Sumo on the Steppes

Historically in Mongolia power shifts between two major parties – the Mongolian People’s Party (MPP) and the Democratic Party (DP), which has ruled for the past four years.

The power base of Democrats is Mongolia’s urban areas and the capital Ulaanbaatar, where country’s burgeoning middle class and business entrepreneurs live.

The main opposition MPP says the livelihoods of ordinary Mongolians have deteriorated sharply in the past four years. It accused the government of racking up foreign loans to build its showcase infrastructure projects that will be impossible to quickly pay back.

“Foreign debt has become a critical issue facing our country,” said Munkh-Orgil Tsend, a member of the MPP and a candidate for parliament.

“As I see it, our country can’t pay back our foreign debt in the next few years. So most likely we have to conduct negotiations with the lenders… Current debt ratio to GDP is 55 percent and likely to reach 75 percent next year.”

But Enkhbold Zandaakhuu, chairman of the Democratic Party and speaker of the parliament, rejected criticism by the opposition.

“As of the last three years, we have built 2,720km of roads and connected seven provincial capitals with Ulaanbaatar. In 2016, we are planning to build 1,284km of roads… We laid the foundation for great development work that was not done in the last 100 years.”

Prime Minister Saikhanbileg Chimed defended Mongolia’s borrowing, saying most of it was done by the private sector and the government owes only about $4.9bn.

“The government will be only responsible for this and rest of the debt will be paid by private-sector companies. There is no country in the world that developed without loans,” Saikhanbileg told Al Jazeera.

The gap between the rich and poor has continued to grow and the latest figures show one-third of Mongolians now live in poverty.

The main opposition party boasts a strong, centralised structure that dates back to communist times. The Democrats, meanwhile, have struggled with factional fighting among various leaders.

MPP has promised to develop its coal and metallurgical industries and reduce petroleum dependency on Russia.

Minor parties and civic groups accuse wealthy and powerful MPs from the two traditional ruling parties of protecting their vested interests at the expense of ordinary Mongolians.

“Ninety-five percent of all bank savings are held by about 1,000 rich families,” said Gankhuyag Khassuuri, an independent candidate for parliament and a business owner.

“Mongolians thought and acted as if there is no other choice… I want to show that we have a third option. These two [parties] attempt to rule through their membership. However, about 20 or 30 wealthy people with offshore accounts hide behind these two parties and have been ruling the country in turn for 26 years.”

At a recent rally in Ulaanbaatar’s Chingeltei district, Erdenebat Danzan from the Mongolian People’s Revolutionary Party ensured the crowd he wasn’t tainted by corruption.

“I don’t have an offshore account. I have nothing to hide and I’m one of you and not one of them,” he said.

Erdene Sambuu, head of the trade union at the state-owned coal mine Tavan Tolgoi, appealed to the public not to vote for the “party of coal miners”, referring to the two dominant parties whose members allegedly hold vast interests in or own coal mining companies.

“These oligarchs want to take power and use the Tavan Tolgoi mine as collateral for their debt,” Erdene said.

Social activist Tseren Enebish added: “It is time to get rid of both DP and MPP. It is time to end corruption and the debt of Mongolia.”

It remains to be seen if Mongolians will heed that message on Wednesday. 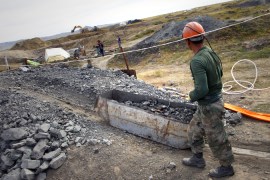 Nomadic families have used the same grazing grounds for generations, but mines are destroying those traditional areas.