The Islamic State of Iraq and the Levant (ISIL, also known as ISIS) group has claimed responsibility for a car bomb suicide attack last week on the Jordanian border with Syria.

The attack, which took place in a buffer zone opposite the Syrian refugee camp of al-Rukban, killed seven Jordanian troops and wounded 13.

ISIL’s news agency released a statement on Monday claiming to have carried out what it described as a suicide attack targeting the “American Jordanian al-Rukban military base”.

The group also posted a video showing a car speeding through flat desert towards an army post, followed by an explosion near the site.

Following the attack, Jordan said it would respond with an “iron fist”.

It sealed off the border, cutting off about 70,000 Syrian refugees stranded in the area from international aid delivery. Aid officials say no food and little water have reached the area.

The latest attack came two weeks after five Jordanian intelligence agents were killed when a gunman stormed the General Intelligence Directorate office in Ain el-Basha near the Palestinian refugee camp of al Baqa’a.

The kingdom is a member of the US-led international military coalition against ISIL and has been carrying out air strikes in both Iraq and Syria.

One of its pilots was captured by ISIL fighters when his plane went down in Syria in December 2014. ISIL later released gruesome footage of him being burned alive, sparking outrage. 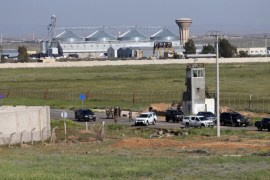