Khaled al-Essa, a Syrian journalist, has died of wounds sustained in an attack inside his home in the northern city of Aleppo.

Essa and his colleague Hadi Abdullah were taken to Turkey for treatment after being injured by an explosive device hidden behind a door in their home on June 16.

At the hospital in Antakya, Essa succumbed to his injuries early on Saturday.

Essa, who served as Abdullah’s cameraman, was due to arrive in Germany for surgery to remove shrapnel from his head but died before it could take place.

The attack came just days after the pair survived a bombing raid in Aleppo while covering clashes between the Syrian army and rebel groups who have been battling for the city since 2012.

The 24-year-old, originally from Kafr Nabl in Idlib province, covered Syria’s civil war in Idlib and Aleppo, bringing images of the aftermath of air strikes on civilian areas to the outside world.

WATCH: Syria – no country for journalists

His death prompted an outpouring of condolences on social media, with many users thanking him for shedding light on the war.

In a widely shared Facebook post, Essa’s mother Ghaliya spoke of her final moments with her son.

“I told him how much people love him and are praying for him. I told him about his friends and how much they miss his laughter.

The war in Syria has killed 95 foreign and local journalists since it started in 2011, according to the Committee to Protect Journalists (CPJ).

The dangers involved in reporting from the country has led to most international outlets suspending operations in the country, leaving it to local journalists and freelancers to supply video footage and reports.

Journalists reporting in the country face threats from the Syrian government and various factions, including the Islamic State of Iraq and the Levant (ISIL) group and al-Nusra Front.

Many local and foreign journalists face the threat of kidnapping and killing by armed groups.

Journalists have also been targeted by ISIL in neighbouring Turkey. 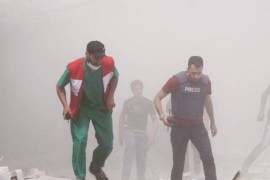 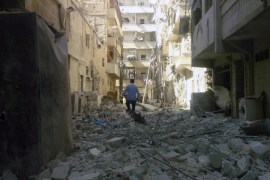