Scotland voted to stay in the EU by 62 to 38 percent in a referendum on Thursday, putting it at odds with the United Kingdom as a whole, which voted 52-48 in favour of leaving.

“It is a statement of the obvious that the option of a second independence referendum must be on the table and is on the table,” Sturgeon told a news conference on Friday.

“As things stand, Scotland faces the prospect of being taken out of the EU against her will. I regard that as democratically unacceptable,” she added.

“I think an independence referendum is now highly likely.”

BREXIT: What will happen next?

Scots rejected independence from the rest of the United Kingdom by 55 to 45 percent in a 2014 referendum, but since then Sturgeon’s pro-independence Scottish National Party (SNP) has surged, winning several elections.

EU membership was one of the key issues in 2014, with those campaigning for Scotland to stick with the United Kingdom arguing that an independent Scotland would not be able to remain a member of the bloc.

Sturgeon said many Scots who had voted against independence for that reason were now re-assessing their decision.

“I want to make it absolutely clear today that I intend to take all possible steps and explore all options to give effect to how people in Scotland voted [on Thursday], in other words to secure our continuing place in the EU and in the single market,” she said.

“If [Scotland’s] parliament judges that a second (independence) referendum is the only way to protect our place in Europe it must have the option to hold one within that timescale,” Sturgeon said.

She said it was “inconceivable” that Britain’s central government in London would stand in the way of a second referendum if it was the will of Scotland’s devolved parliament, which the SNP dominates.

Splitting Scotland from the UK would end three centuries of shared history, upending another successful economic relationship shortly after the now-impending divorce between Britain and the EU.

In a separate development, Irish nationalist leaders in Northern Ireland also called for a poll on leaving the United Kingdom and uniting with Ireland.

Most voters in Northern Ireland also voted to remain in Thursday’s referendum.

Declan Kearney, Sinn Fein’s national chairman, delivered a strongly worded statement after the referendum in which he said English voters had “dragged Northern Ireland out of the EU.

“English votes have overturned the democratic will of Northern Ireland.”

The party will now press for the calling of a border poll under the under the provisions of the Good Friday Agreement, he said.

Deputy First Minister for Northern Ireland, Martin McGuinness, also strongly stated that his country wants to remain in the European Union and a border poll may be on the cards.

“The people of the north of Ireland, nationalists, republicans, unionists and others have made it clear at the polls that they wish to remain in the EU,” he said.

“Sinn Féin will be seeking an urgent meeting with the Irish government, the European institutions and also with our counterparts in Scotland to discuss how we move forward in the best interests of all of our people.”

On the other hand, Northern Ireland’s pro-British First Minister dismissed the calls by Irish nationalists for a referendum on Irish unity as “opportunistic” and said there is no way such a poll would be approved.

“There is no way, even if there was a border poll, that it would be in favour of a united Ireland,” Arlene Foster, the leader of the pro-British Democratic Unionist Party, told Radio Ulster. 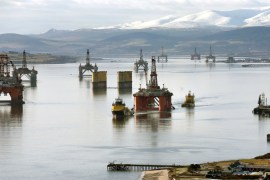 As Scotland nears elections on May 5, the calculus for independence shifts along with economic and political indicators. 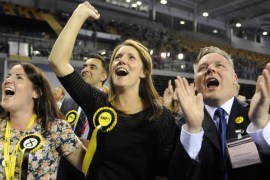