The head of Iran’s Revolutionary Guards has issued a warning to Bahrain suggesting there could be armed resistance across the country after Manama stripped the kingdom’s top Shia cleric of his citizenship.

The Bahrain News Agency quoted the Interior Ministry on Monday as saying that Sheikh Isa Qassim had played a key role in creating an “extremist” sectarian atmosphere and working to divide Bahraini society.

The move against Qassim comes less than a week after a court suspended the activities of the country’s leading Shia opposition group, Al-Wefaq, on charges of “terrorism, extremism and violence” in the kingdom, and having ties to a foreign power – pointing a finger at Iran, a vocal critic of the Sunni-led monarchy.

General Qassem Suleimani, commander of the Revoutionary Guard’s elite Quds Force, warned Bahrain on Monday its move against Qassim could “set the region on fire”.

“Al-Khalifa [the rulers of Bahrain] will definitely pay the price for that and their bloodthirsty regime will be toppled,” Suleimani said in a statement published by Iran’s state-run Fars news agency.

After the decision was announced, several hundred Qassim supporters gathered outside his home in the mostly Shia village of Diraz west of the capital, carrying posters and chanting religious slogans.

Bahraini media reported last week that authorities had been investigating a bank account in Qassim’s name holding nearly $10m to determine where the funds were coming from and how they were being spent.

The exiled opposition group the Bahrian Institute for Rights and Democracy released a statement warning the state’s move against Qassim would escalate domestic tensions and could lead to violence.

“We are deeply concerned that these actions will escalate tensions on the streets and may even lead to violence, as targeting the country’s leading Shia cleric is considered … a red line for many Bahrainis,” said Sayed Ahmed Alwadaei, the group’s director of advocacy.

The US State Department said it was “alarmed” by the move, and that it was “unaware of any credible evidence” to support the removal of the spiritual leader’s citizenship.

Qassim, who had served as a member of parliament in the 1970s, could face deportation, though dozens of other Bahrainis stripped of their nationality have remained in the country without the benefits of citizenship, such as access to free healthcare and pensions. Their passports are revoked and they are considered stateless.

The United Nations High Commissioner for Human Rights, Zeid Ra’ad Al-Hussein, says at least 250 people have been stripped of their Bahraini citizenship in recent years due to alleged disloyalty. Rights groups say at least five were deported in recent months after having their citizenship stripped.

Bahrain has been in turmoil since a 2011 uprising backed by majority Shia Muslims and others demanding reforms and a greater rights from the Sunni-controlled kingdom.

The government crushed the protests with the help of its Sunni Arab Gulf allies suspicious of Iran and opposed to a growing Shia influence across the region. 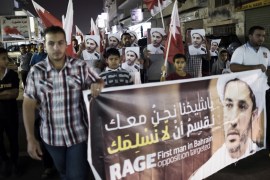 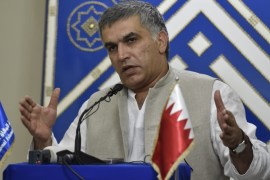 Nabeel Rajab, president of the Bahrain Centre for Human Rights, arrested during raid on his home. 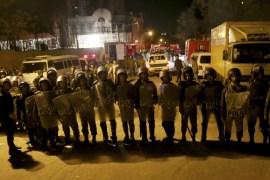