Chios, Greece – Families are made to handwash their clothes in a trough-like fountain behind the long row of tents in the crowded Souda refugee camp, nestled between the coast and historic ruins on this Greek island.

Dozens wait in a lengthy queue to obtain special food portions for their sick offspring, while children play along the dirt passage bisecting the camp. Although it is an unrecognised camp, Souda is home to at least 1,000 refugees and migrants.

Anger is high in the island’s refugee camps as the Greek asylum process moves at a snail’s pace. Scheduled to start earlier this week, the asylum registration process has been delayed until Friday. In other parts of Greece, the pre-registration process began last week.

Along with the more than 2,000 refugees in the Vial camp and the estimated 300 camped out next to a dilapidated theatre down the road, Souda’s residents are barred from leaving Chios as a result of the March agreement to halt the flow of refugees between the European Union and Turkey.

Achraf Zbir, 29, arrived in Souda more than a month ago after leaving his hometown of Casablanca, Morocco. “You see the conditions here,” he tells Al Jazeera, motioning to a large mound of rubbish. “You see the trash, the lack of food.”

“Most of these people have family in Germany or elsewhere in Europe, but now we’re stuck here,” Zbir added, explaining that the only people able to continue their journeys are those with enough money to hire expensive smugglers. “But our money ran out a long time ago.”

George Kiritsis, a government spokesman for refugee affairs, admits that resistance by the local population in Chios has delayed the process.

“We are trying to accelerate the process,” he tells Al Jazeera. “We understand there are delays, but there were certain difficulties in the procedure; especially in Chios because in the beginning the locals were blocking [the delivery of] some of our containers and equipment.”

Though arrivals have plummeted since the EU-Turkey deal, nearly 300 refugees and migrants have made it to Greece by boat this month.

“The number of people arriving has gone down, but the number on the island is increasing,” says Maria Lavida, a Greece-based spokeswoman for Doctors of the World NGO.

With the camps at full capacity, residents are enduring difficult humanitarian conditions. “The most common medical ailments are stomach and intestinal disorders, common flu, and broken limbs due to the situation in the camps,” Lavida tells Al Jazeera.

The group and others have been trying to treat as many patients as possible in on-site clinics because the local hospital is overcrowded.

“Many people are also suffering from depression because of the stress,” Lavida adds. “They have been waiting for so long. This is a situation that makes them anxious and desperate, and they don’t know what’s next.”

A five-minute walk down the road from Souda lies Dipethe, an impromptu refugee camp where some 300 people – mostly Syrians and Iraqis – sleep under tarpaulins and in small tents at an abandoned municipal theatre.

Dipethe’s residents ended up here after fleeing violent clashes between Syrians, Afghans and other groups in Vial, a closed refugee centre south of Chios.

Ammar al-Ashqar, 27, shares a makeshift tent – a large rain tarpaulin tied to the wall of the theatre and held up with old wooden planks – with nine relatives.

His family fled the southern Damascus countryside and arrived in Chios on March 20, only two days after the European Union and Turkey reached a deal to deport refugees and migrants back to Turkey in exchange for the resettlement of Syrian refugees in that country.

The camp is lined with similar tents, most of which are stringed together by thin ropes. Water leaks from under a row of portable toilets at the camp’s edge, as children holler and run through the maze of tents and tarpaulins.

With the sun setting behind them, a group of men place blankets on the bare earth to pray before they break the fast for Ramadan, the holy month for Muslims.

Ashqar recalls making the 7km trek from Vial with his family before sunrise one morning last month to escape the clashes gripping the camp. He holds up his telephone to show a video of fires in the camp as groups of masked youth threw petrol bombs and rocks at one another.

After sleeping in the port for four days, the families were attacked by right-wing locals and later moved by police to the theatre’s courtyard.

“We are scared the police will move us back to Vial at some point. Many of the kids here are sick, and people are very angry,” he says, explaining that ill residents in the camp have been denied requests to travel to Athens for medical treatment that isn’t available in Chios.

“The Greek authorities haven’t done anything. They did some pre-interviews, but we’ve been stuck here for three months already.”

Ashqar estimated that 60 percent of the families in Dipethe “are completely broke”. He adds: “The only way for us to even get food is from the aid organisations.

“If we stayed in Syria with the bombs and violence, it would have been better than being imprisoned here on the island.”

More than a million refugees and migrants reached European shores after taking boats across the Mediterranean in 2015, while at least 211,108 have made the trip so far this year, according to the United Nations refugee agency, UNHCR.

An estimated 55,000 refugees and migrants are bottlenecked in Greece since Macedonia sealed its borders in March, along with other countries across the Balkans.

In northern Greece’s Evzoni, police arrested at least 26 volunteers while forcibly evicting refugees and migrants from unrecognised camps near a hotel and a pair of petrol stations located a few kilometres from the Macedonian border on Monday.

Back in the Souda camp, Walaa, who was a teacher back in the Syrian city of Homs, lives in a cramped container with her husband, two children and two other families. “We are being made to live like animals here,” she says, declining to provide her last name for fear of her relatives’ safety back home.

A group of children kick a fooball behind her as camp residents made their way to the food and medicine queues near the camp’s entrance. A few dozen metres away, a pair of young boys toss stones into the water.

“I don’t care if they send us back to Turkey, but they should do it already,” Walaa said. 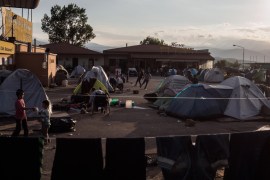 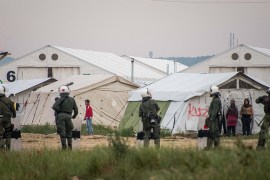