A Saudi national accused of trying to take part in the September 11 attacks who has been repeatedly tortured gets a chance to plead his case in front of a Guantanamo parole-like board on Thursday.

The United States government has admitted that prisoner Mohammed al-Qahtani was tortured, including severe sleep deprivation, sexual humiliation, violence and other sadistic interrogation methods carried out for weeks, which were detailed in a log about the US prison in Guantanamo Bay, Cuba.

Currently not charged with a crime, Qahtani’s torture and time at Guantanamo is said to have “caused psychotic symptoms that included repeated hallucinations involving ghosts and a talking bird”.

The prisoner “also often soiled himself, cried uncontrollably, and conversed with himself and with others who were not present”, according to his legal team.

Qahtani tried to enter the US on August 4, 2001, “almost certainly” to be a 20th 9/11 hijacker, according to American officials. Mustafa al-Hawsawi, an alleged organiser and financier, is said to have provided him with money and a ticket to Orlando, Florida.

However, Immigration and Naturalization Service officers denied Qahtani, now 40 years old, entry because officers thought he seemed suspicious and they sent him back to the United Arab Emirates.

Qahtani later returned to Pakistan and Afghanistan. He was captured and then transferred to Guantanamo in February 2002.

Qahtani, who has been described as short and skinny, “wasn’t very intelligent” and did not have a “well-thought-out cover story” about his reason for being in Afghanistan, and about why he had arrived in Florida via a one-way ticket “with almost non-existent English”, according to an account by former FBI special agent Ali Soufan, who interrogated Qahtani and wrote about it in his book, The Black Banners.

Qahtani, who Soufan wrote “evidence indicated” was an intended “muscle” hijacker, would likely only have known about his specific role in a plot, but not other plans. However, the abusive techniques used on Qahtani by others “did not manage to get any valuable information” – let alone “the basic stuff”, according to Soufan.

Mark Fallon, a former special agent in charge of the Criminal Investigation Task Force, told Al Jazeera he too was concerned that the abusive techniques were not going to be effective. Equally important he said he thought they would also be illegal, and “would make Qahtani un-prosecutable after [they] had done things that were tantamount to torture”.

The Saudi prisoner, who wants to return to his family in the Gulf kingdom, has been “mostly compliant,” but has “not cooperated with his interrogators”, according to the US military.

Qahtani suffered from “severe psychiatric disabilities” prior to his alleged criminal acts, according to his lawyers.

Qahtani’s first traumatic brain injury occurred because of a car accident when he was an eight-year-old, a review board was told. Later he had shown “extreme behavioral dyscontrol,” including an episode when he was found naked by Riyadh police in a dumpster.

The legal team cites expert witness Dr Emily Keram, who reviewed Qahtani’s 2,000 records of “involuntary psychiatric hospitalization” in Mecca, and concluded his “pre-existing mental illnesses likely impaired his capacity for independent and voluntary decision-making well before the United States took him into custody, and left him ‘profoundly susceptible to manipulation by others'”.

The “severity and long standing of his psychiatric problems” give Qahtani’s lawyers “good reason to doubt the accuracy of the government’s factual account of his past actions”, Shane Kadidal, a senior managing attorney at the Center for Constitutional Rights and a lawyer representing Qahtani, told Al Jazeera in an email.

Today, Qahtani is said to suffer from post-traumatic stress disorder and he would receive the best care if returned to Saudi Arabia, according to Keram.

The Saudi Ministry of Interior is said to have offered “security and humane treatment guarantees”, and expressed a “readiness to welcome him in its rehabilitation and aftercare programme”.

Qahtani “can’t realistically be charged – too much of what they would need to show in his case relates to intent, and there is nothing but torture evidence going to intent”, Kadidal said.

Regarding any potential threat concerns the prisoner may pose if released a “psychiatric commitment in a country with a modern psychiatric resources and an all-seeing secret police ought to satisfy anyone’s concerns”, he added.

There are 80 men left in Guantanamo, which US President Barack Obama has consistently promised to close. In addition to 10 men in various stages of military commission proceedings, some 30 prisoners are cleared for transfer while 40 men are not. But they have also not been charged with a crime – it is these later men who are appearing before the Periodic Review Board, compromised of senior officials with a stake in national security, to plead their cases.

Expected later this year is the PRB hearing of Abu Zubaydah, the first “black-site” prisoner who was also subjected to waterboarding 83 times in one month.

On Tuesday, the CIA released documents, some heavily redacted, regarding its torture and rendition programme. In the documents, it is apparent there was awareness that Zubaydah’s interrogation could kill him.

“If subject dies, we plan on seeking assistance for the cremation of subject,” states one of the documents, which were released after lawsuits from the American Civil Liberties Union and reporter Jason Leopold.

Further, the waterboarding was pointless. “In any event, there was no evidence that the waterboard produced time-perishable information which would have been otherwise unobtainable,” another document stated.

“In the end it confirms what everyone already knows, and there will be no strong justice handed to those who ordered the ‘enhanced interrogation’,” his sister-in-law Jody Abu Zubaydah told Al Jazeera.

“The CIA felt like they were above all laws,” she said, adding she believed it could happen again as there has been no accountability.

Meanwhile, Qahtani should know in about a month if the review board will recommend he be transferred.

“Perhaps more than any other prisoner, Mohammed al-Qahtani’s continuing imprisonment at Guantanamo represents everything about the prison that is inconsistent with our proclaimed national values,” his lawyers said.

“To begin to turn the page on this ugly chapter in our country’s recent history, surely our government must release from its custody the one man whose torture it has officially acknowledged.”

23 November 2002: The detainee arrives at the interrogation booth at Camp X-Ray. His hood is removed and he is bolted to the floor…

07 December 2002: Corpsman checks vitals and finds the detainee’s pulse is unusually slow. Doctor arrives and decides to perform an EKG…

19 December 2002: Began teaching the detainee lessons such as stay, come, and bark to elevate his social status up to that of a dog. 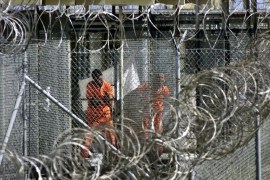